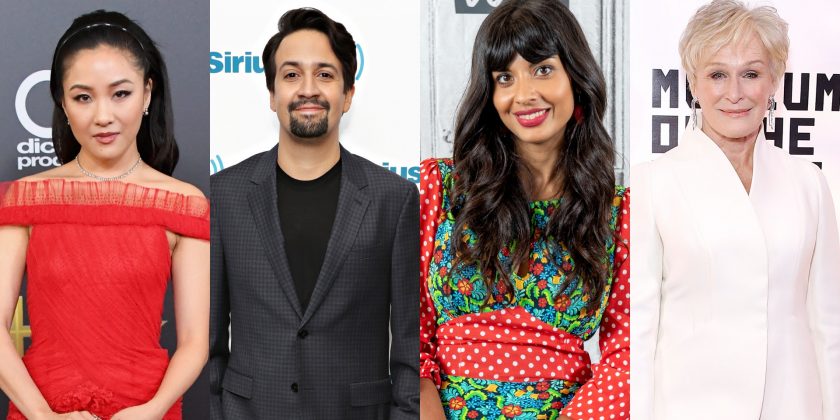 On Thursday, the Hollywood Foreign Press Association announced the complete list of nominees for the 76th Annual Golden Globe Awards, set to air on Sunday, Jan. 7 on NBC. Following the announcement, nominees reacted in statements and on social media to the exciting news.

After Glenn Close nabbed a nomination for “Best performance by an actress in a motion picture, drama” for her leading role in The Wife, she called into the Today Show with her reaction to the news. “I’m luckier than you — I’m laying in bed!” Close said. “I didn’t even know it was happening. I’m doing a show at the Public and I came home [last night]. I was surprised — I thought it was a butt call this morning.”

In a statement, Bradley Cooper reacted to his directorial debut in A Star Is Born earning four nominations for “Best actor,” “Best actress,” “Best director” and “Best original song.” Cooper said, “I am very grateful A Star is Born has touched so many people and to the Hollywood foreign press for recognizing our film with such abundance. I’ve wanted to tell stories through film for as long as I can remember and I feel lucky even to have had the opportunity to do that – to be included in a community of such inspiring artists is incredibly humbling. A huge congrats to all of this morning’s nominees and especially to my dear friend, Lady Gaga.”

Fellow “Best director” nominee Spike Lee also released a statement about his film BlacKkKlansmen receiving four nominations: “I found out about these Golden Globe Nominations for BlackKklansman in between advising my NYU Grad School students because I teach on Thursdays. The first word that came to mind was ‘BOOM SHAKALAKA.’ Thank you to the HFPA!”

In addition to releasing official statements, several stars also took to social media to give their thanks to the HFPA for their nominations, or to uplift others.

Crazy Rich Asians star Constance Wu tweeted, “What a morning to have had my phone on Do Not Disturb Mode till now… I’m ecstatic but also in shock! Thank you @goldenglobes !!!” She received a nod for her performance in the film and Crazy Rich Asians is also up for “Best motion picture, comedy or musical.”

Pose producer Janet Mock tweeted, “We are going to the #GoldenGlobes, honey!!! I am overjoyed that a show led by mostly unknowns, a cast that is trans and gay, black and brown, where WE are our own HEROES, is nominated for best drama series AND best actor for @theebillyporter! #PoseFX is Golden Globe-nominated!”

Meanwhile, Mary Poppins Returns star Lin-Manuel Miranda tweeted, “Woke up to my phone leaping off the bedside table Grateful for the nom, grateful to the @goldenglobes, grateful to all of you.”

Caitriona Balfe, who received a “Best actress” nod for her performance in STARZ’s Outlander, tweeted, “Wow, thoroughly shocked and completely ecstatic to hear I am among the nominees for this years @goldenglobes A HUGE thank you to the HFPA for their continued support and a HUGE congratulations to Julia, Elizabeth, Sandra and Keri, I am beyond proud to be in your company. But Mostly, thank you to my incredible fellow actors and the wonderful team of writers, producers and crew on @Outlander_STARZ that push me to my best.”

The Good Place star Jameela Jamil tweeted, “HOLY FORKING SHIRTING FORKING BALLS! @nbcthegoodplace GOT NOMINATED FOR A GOLDEN GLOBE!!!!! ‘BEST TELEVISION SERIES’ SORRY I’M SCREAMING!!!! Congrats to @IMKristenBell who also got a nom!!! @KenTremendous and our fabulous writers, and my fellow cockroaches. THIS IS VERY COOL!”

These reactions are just some of the highlights; the complete list of Golden Globes nominees features first-time nominees as well as awards-season veterans. Sandra Oh and Andy Samberg have been tapped to host the live awards show broadcast on Sunday, Jan. 6 at 8/7c on NBC. Tune in to see who wins and what memorable moments we’ll all be talking about as we kick off 2019.