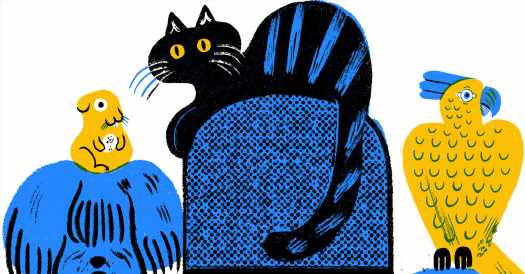 In a period filled with relentless bad news, one silver lining has been the upward trend in pet ownership. Adoption and foster rates soared during the pandemic, as people sought furry friends to make their isolation more bearable. And despite alarmist headlines to the contrary, most Americans are holding onto their pandemic pets now that the country is returning to normal.

Whether you’re a new or longtime owner, these six podcasts will help you to appreciate your bond with your pets, learn more about how their brains work and navigate the challenges of spending less time with them as the world reopens.

If you’re one of those people who is physically incapable of walking past a dog without stopping to pet it, you’ll feel right at home with this charming show. “Can I Pet Your Dog?” has been delivering joyful canine content since 2015, in a weekly format that combines guest interviews, personal anecdotes and important dog news you might have missed. The hosts, Renee Colvert and Alexis Preston, aren’t just dog owners, but unabashed dog obsessives. Their infectious enthusiasm infuses every segment of the show — whether it’s an interview with Lin-Manuel Miranda about his rescue pup, a listener-submitted monologue or simply a story about petting a really good dog.

Despite being only slightly less popular than dogs in the United States (and much more popular elsewhere), cats often get short shrift. They’re routinely shut out of scientific research and caricatured as aloof and antisocial compared with man’s best friend. Enter “The Purrrcast,” a warmhearted safe space for cat people. Hosted by Steven Ray Morris (a longtime producer of the powerhouse true-crime podcast “My Favorite Murder”) and Sara Iyer, the show is primarily relaxed conversations between the duo and various feline fans. Some guests are well-known — Margaret Cho made a recent appearance to talk about her two hairless cats, Sarong and Sacre Coeur — while others are feline professionals, like a founder of a nonprofit cat cafe.

Dogs and cats (and the sometimes-friendly rivalry between those who love them) dominate the pet ownership conversation so completely that there’s not much room left for other species. And while this show isn’t technically about pets, it’ll satisfy any cravings you might be having for more exotic animal stories. Each installment of “Species” focuses on a different, often highly specific, type of creature — recent highlights include the largest snapping turtle on earth, a rare poisonous bird and a butterfly that’s billed as “a Trojan horse and a Rube Goldberg machine wrapped into one.” The host, Macken Murphy, is able to condense vast chunks of information into engaging and digestible episodes, providing a holistic picture of each animal’s place within a larger ecosystem. Fact-filled and fun, this is an ideal choice to listen to with children.

NPR has a podcast for just about everything, and one filled with heartwarming pet stories is no exception. With episodes clocking in at just two minutes, “Speaking of Pets” is an easy way to squeeze a little more animal content into a busy day, delivered in the soothing tones of Alabama Public Radio’s Mindy Norton. The show has been airing as a radio segment since 1995, and its topics range from grooming tips to the latest research on human-animal bonds. One recent episode touched on the dangers of leaving dogs alone in hot cars, while the next switched gears to tell the story of a war hero dog named Rags, who served alongside his soldier rescuer in World War I.

Training is one of the most daunting aspects of dog ownership, particularly when adopting a puppy or introducing a new pet to established household animals. It can also be difficult to distinguish between “normal” bad behavior that’s easily corrected and deeper behavioral issues that need more attention. As its adorable title indicates, “Dr Dunbar’s iWoofs” offers bite-size audio tips on house-training, socialization, equipment and much more. A British veterinarian and animal behaviorist, Ian Dunbar has a palpable depth of knowledge, and on the show, he’s joined by his wife, Kelly, and son, James, in tackling listener questions and dismantling dog-training myths.

Starter episode: “The Myth of Intent”

If you think dogs are the only type of pet that can accompany you on your travels, think again. There’s a whole world of cat owners who take their feline companions with them on coffee runs, car rides, backpacking vacations and more, and “Catexplorer” has been telling their stories for eight seasons. The hosts, Daniel and Hasara Lay, give step-by-step guidance on how to train your cat (yes, really) and transition them into a life of exploration. They share anecdotes from their own feline adventures, coach listeners who are training their cats for the outside world, and talk to fellow “catexplorers” about their successes and war stories. Even if you’re not a cat owner, this quirky show is an uplifting eye-opener.

Starter episode: “Helping Your Cat React to Strangers While Catexploring, Traveling in the Car, Watersports and More with Katrina & Luna”