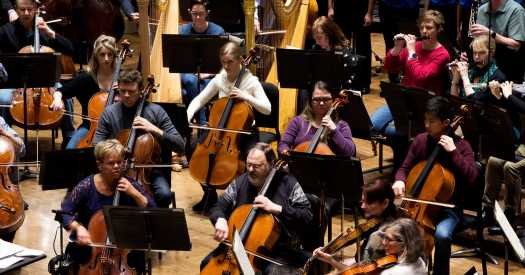 Our guide to the city’s best classical music and opera happening this weekend and in the week ahead.

MET ORCHESTRA at Carnegie Hall (May 18, 8 p.m.). Valery Gergiev leads the orchestra of the Metropolitan Opera in the first of three concerts at Carnegie over the next several weeks. The program is simple enough, with Schubert’s Symphony No. 9 following Schumann’s Piano Concerto. Daniil Trifonov is at the keyboard.
212-247-7800, carnegiehall.org

‘MURASAKI’S MOON’ at the Metropolitan Museum of Art (May 17, 4 and 6:30 p.m.; May 18, 2 and 6 p.m.; May 19, 11 a.m. and 3 p.m.). On Site Opera will give the premiere of a new work by the composer Michi Wiancko, with a libretto by Deborah Brevoort, based on the life of Lady Murasaki and the creation of her novel “The Tale of Genji.” Directed by Eric Einhorn and conducted by Geoffrey McDonald with a cast that includes Kristen Choi in the lead, the performances will be held in the Astor Chinese Garden Court. Standing room tickets are still available for Saturday evening’s and Sunday’s performances; try for returns to Friday’s and Saturday afternoon’s shows.
212-570-3750, metmuseum.org

NATIONAL SYMPHONY ORCHESTRA at Carnegie Hall (May 19, 2 p.m.). It was quite the coup for this Washington ensemble to hire the conductor Gianandrea Noseda, who recently renewed his contract until 2025. This unlikely program of religious works that Noseda and the orchestra bring on their first visit together to New York shows why. In the first half comes Liszt’s “Dante” Symphony, a descent into hell and out again; in the second, Rossini’s “Stabat Mater.” The vocal soloists are Erika Grimaldi, Chiara Amarù, Michele Angelini and Marko Mimica; the University of Maryland Concert Choir is on hand, too.
212-247-7800, carnegiehall.org

PITTSBURGH SYMPHONY ORCHESTRA at David Geffen Hall (May 19, 3 p.m.). The orchestra that is redefining excellence in the core repertoire arrives in New York for the first time in five years, with music that is their specialty. Till Fellner is the soloist in Beethoven’s Piano Concerto No. 5, which precedes a performance of Mahler’s Symphony No. 5. Manfred Honeck is on the podium.
212-721-6500, lincolncenter.org

‘THE STONEWALL OPERAS’ at the Stonewall Inn (May 19, 7:30 p.m.; May 20, 8 p.m.). New York Opera Fest, which has become a remarkably strong and diverse exploration of everything opera can be in the city, presents four half-hour operas, written and composed by alumni of New York University’s Tisch School, designed by Tisch students, and directed by students at the New School. All of the works focus either on the Stonewall uprising or its influence, and are performed by singers from American Opera Projects.
nyoperafest.com