Hot on the heels of white-people-wellness drama The White Lotus, Hulu’s Nine Perfect Strangers, based on the eponymous novel by Liane Moriarty, swept in to inform us how úber-rich people spend their money (Lamborghinis and plastic surgery), and why they’re so very sad. Michael Shannon’s Napoleon Marconi might object at this point and remind us he’s a high school teacher who got in on a discount, but the vibes of this David E. Kelley (of Big Little Lies) are unmistakably a look into a wealthy world, and one with a sense of impending doom with that. Will someone die by the end of this series? It’s not guaranteed the way it is in The White Lotus, but it sure does seem less and less likely with each episode that we’re all getting out of this alive — as illustrated in the final shot of this week’s episode: the mural scrawled onto Masha’s wall declaring “IT’S GOOD TO DIE.” 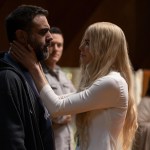 But before we get into the murder of it all, this week’s episode has forced us to consider what exactly this show is doing when it’s talking about wellness. Liane Moriarty, co-creator of the series and author of the novel upon which it’s based, has been vocal about the fact that her book was intended as a satire of the wellness industry, and a critical one at that. So far, it’s not clear that the show will be making that same statement, despite plenty of moments that are certainly intended to draw a laugh at the expense of existing wellness treatments. (“Dozens of wellness institutes are doing this,” Masha solemnly informs Manny Jacinto’s Yao of their practice of secretly microdosing their guests: “You know that.”)

One big difference revealed in this week’s episode — that the guests all choose to stay in Masha’s care even after finding out that she’s been giving them psilocybin without their knowledge — raises some big questions about how the show will treat Masha’s “methods” as this all plays out.

While the show is happy to poke fun at the relief the guests hope to find in meditation or smoothies, many of the moments we’ve seen under Masha’s care haven’t been about “wellness,” they’ve been about dealing with real trauma and rage, in moments that feel (and are meant to feel) very serious. Napoleon’s speech about his son is heartbreaking; so is Melissa McCarthy’s Frances breaking down about the family she’d hoped for. In Moriarty’s book, the characters we meet do ultimately find real transformation and move on from their pain, but it seems to happen explicitly in spite of Masha and her attempts to “heal” them — in the series, the moment these characters agreed to continue being drugged by Masha (and the subsequent moments when her treatment seemed to be working, like Heather having a breakthrough on her intimacy with Napoleon), the show asked us to take it more seriously too.

The big fear in watching this is that the show will ask us to excuse Masha’s methods with the argument that it ends up working for these guests. It’s one thing to explore alternative treatments, and another to tacitly endorse psilocybin dosing as a one-size-fits-all treatment for trauma, which the show risks doing if everyone agrees to take more and solely ends up the better for it. Going back to all the murder hints the show has been dropping, though, we’re probably in for something much darker than the group uniformly leaving as psilocybin evangelists. For now, I’m still assuming that the other shoe will drop — and hoping against hope that Delilah’s bipolar disorder plotline is not about to be used for evil.

Episode 4 of Nine Perfect Strangers revealed huge bombshells that basically guarantee the ending of the series will be nothing like the ending of the book, so read on for what they were and how they might affect what happens next.