If you follow theater, you probably already know about the Broadway bigfoots opening this month: “Network” starring Bryan Cranston, “To Kill a Mockingbird,” starring Jeff Daniels, and “The Cher Show,” starring three Chers. But it’s also a month, Off Broadway, for wider exploration, from Beverly Hills and Brooklyn to France, Iran and Iraq.

Wait — there aren’t just three Chers in town this month. There are four. The one without Bob Mackie outfits is Cher Horowitz, the eternal optimist at the heart of “Clueless, The Musical,” adapted from the 1995 movie that was itself a riff on Jane Austen’s “Emma.”

The New Group production, directed by Kristin Hanggi, stars Dove Cameron in the role made famous by Alicia Silverstone. She and her Beverly Hills friends now sing and dance to a score of ’80s and ’90s hits including “U Can’t Touch This” and “She’s So High.”

Some lyrics have been rewritten, but don’t expect other major changes. The musical is by Amy Heckerling, who wrote and directed the movie. (Tickets: www.thenewgroup.org) 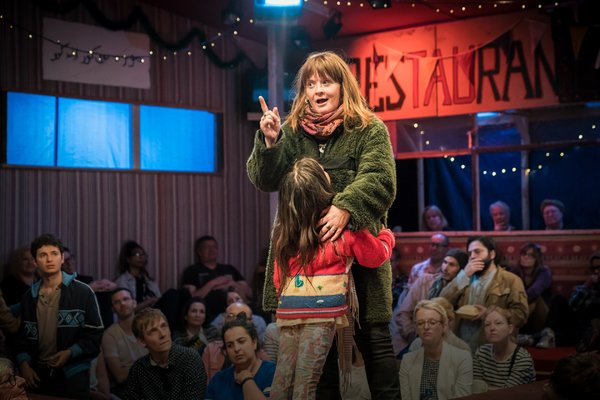 One of the bright spots in the lives of the thousands of people stuck in a migrant camp in Calais, France in 2015 and 2016 was a makeshift theater called Good Chance. Organized by Joe Murphy and Joe Robertson, it gave refugees a place to perform and listen, dance and cry.

It also gave Mr. Murphy and Mr. Robertson the material for a play. But the result, called “The Jungle” after the name of the camp, is not a tribute to the transcendence of liberal values. Rather, it’s a way of asking whether their good intentions made a positive difference or were just a diversion.

After a successful run in London, the immersive production, directed by Stephen Daldry and Justin Martin, lands at St. Ann’s Warehouse in Dumbo. Featuring several former residents of the camp, it may leave you harrowed. “By the end,” Ben Brantley wrote in a review this summer, “cast and audience seemed to have melted into one teary, sweaty blur.” (Tickets: stannswarehouse.org)

‘Fabulation, or the Re-Education of Undine’

Lynn Nottage’s two Pulitzer Prizes — for “Ruined” in 2009 and “Sweat” in 2017 — honor big tragedies about big subjects: war, labor, powerlessness. But one of her earlier, breakthrough plays, in 2004, was a picaresque comedy on a much smaller scale. Instead of a community there is one woman, Undine (born Sharona Watkins). And among the awful things that happens to her is that … she’s forced to move from Manhattan to Brooklyn.

But the story of a successful black woman’s “social fall and moral rise” is deliciously told, making “Fabulation, or the Re-Education of Undine” (directed by Lileana Blain-Cruz) a great opener to Ms. Nottage’s residency at the Signature Theater. A revival of “By the Way, Meet Vera Stark,” a Hollywood satire from 2011, follows at the Signature in January. (Tickets: signaturetheater.org)

The idea behind Nassim Soleimanpour’s “White Rabbit Red Rabbit,” which played on Monday evenings for nine months in 2016, was that a different “guest star” enacted the text at each performance, without having seen it beforehand.

It was a stunt that paid off, at least when the actors were inventive enough. Nathan Lane, for instance, was able to make connections between the nearly sadistic requirements of the form and the situation in which it was written: Mr. Soleimanpour, an Iranian dissident, was then, in essence, a prisoner of a repressive power.

Now he lives in Germany and can say what he likes more directly. But in a new play, “Nassim,” directed by Omar Elerian, he doubles down on the gimmick. The unprepared guest stars scheduled to perform this month in the Barrow Street Theatrical production include Michael Shannon, Cush Jumbo and Michael Urie. But this time they have a surprise collaborator as well. No spoilers here! (Tickets: barrowstreettheatre.com)

When the city of Mosul fell to ISIS in 2014, many Iraqi émigrés felt the strange, double loss of something they had long since left.

That’s the subject of “Noura,” a new play by Heather Raffo, directed by Joanna Settle for Playwrights Horizons. Eight years after fleeing Iraq, Noura and her family set out to celebrate a thoroughly happy Christmas in New York, only to find that unhappiness has a way of emigrating too.

Ms. Raffo, who played nine Iraqi women in “Nine Parts of Desire,” her 2004 breakthrough, plays just one, the title character, in “Noura.” (It’s no coincidence that the name echoes that of Ibsen’s Nora.) She brings to the role not only a writer’s knowledge but also a personal connection: Her father was born in Mosul. (Tickets: playwrightshorizons.com)