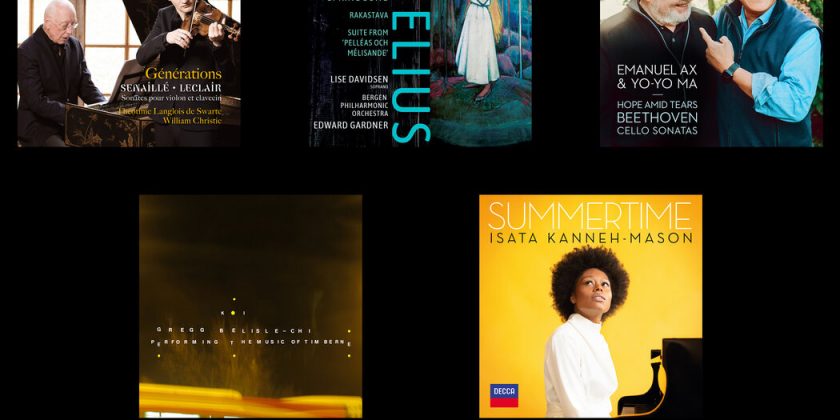 This dashing album has been my introduction to the composer Jean-Baptiste Senaillé — well loved by the French aristocracy in the early 18th century, but now an obscurity — as well as to the young violinist Théotime Langlois de Swarte.

This is Langlois de Swarte’s third release in the past year, following a duo disc with the exuberant lutenist Thomas Dunford and a recital of piano-violin music played in Proust’s Paris. But this recording of sonatas by Senaillé and the slightly younger Jean-Marie Leclair boasts the most celebrated partner: the Baroque eminence William Christie, who founded the ensemble Les Arts Florissants and joins on harpsichord with graceful restraint.

That restraint makes this truly a showcase for Langlois de Swarte, whose sweet, rich sound in these sonatas can be assertive, almost rustic, in fast movements and silky in slow ones, with a tasteful hint of wiry ping. Whatever the tempo, a quintessentially French danciness is paramount, an elegant playfulness that breathes even through Italianate harmonic wanderings: The back end of the Gavotte in Senaillé’s Sonata in D here gets fascinatingly dusky. From the opening Adagio, passionate yet poised, to the ideally spirited Allegro finale, that sonata is a particular highlight of an intimate, stylish album. ZACHARY WOOLFE

Yo-Yo Ma and Emanuel Ax, longtime colleagues and friends, have played Beethoven’s five sonatas for cello and piano for some four decades, and won Grammy Awards for recordings of them in the 1980s.

Last year, in the midst of pandemic lockdowns, they recorded them again, along with three sets of Beethoven’s inventive piano-cello variations, with eloquent results. The title of the new album, “Hope Amid Tears,” comes from an inscription Beethoven wrote on a copy of the manuscripts for the Cello Sonata No. 3 in A that he sent to a patron.

At least that’s the story; it might be apocryphal. Still, it resonates with Ax, as he writes in perceptive liner notes. Vienna was then in the midst of the Napoleonic Wars; Beethoven was isolated and confronting his increasing deafness. Today the world is once again engulfed in crisis. That may well have affected these artists, who bring a combination of sublimity and pensiveness, wildness and spontaneity, to scores that span two decades of Beethoven’s career. Ma and Ax come across not like two artists in their rich maturities, but as endlessly curious, still finding new facets and wonders in this music. ANTHONY TOMMASINI

You can hear the composer Julius Hemphill’s influence all over Tim Berne’s complex, addictive writing for various improvising ensembles. And, as with Hemphill, Berne’s music is particularly open to adaptation. In 2017, the pianist Matt Mitchell reinterpreted items from Berne’s catalog on the album “Forage.” Taking inspiration from that effort, Gregg Belisle-Chi has released his own collection of arrangements for solo guitar from the Berne songbook album.

Released jointly on the Relative Pitch label and on Berne’s Screwgun imprint, which also offers Belisle-Chi’s scores for sale, it’s a subtle stunner. While a tune like “Huevos” has typically stormed from the gate in small group performances, Belisle-Chi’s version is a sly, patient route through the piece — emphasizing this music’s connection to earlier composer-improvisers, like Thelonious Monk. But the fun isn’t only in compare-and-contrast: Even compositions that have yet to appear on other Berne releases receive fine recorded introductions here. SETH COLTER WALLS

Sibelius: ‘Luonnotar’ and Other Works

Lise Davidsen has graduated from fast-rising soprano to omnipresent star. A fixture of pandemic livestreams, and now audience-filled theaters, she has also appeared on three recordings so far this year — four if you count the “visual album,” available on iTunes, of Beethoven’s “Fidelio,” captured at the Royal Opera House in London just before the lockdown last March.

The biggest spotlight was on her recent solo album — of opera excerpts and a mighty, moving account of Wagner’s “Wesendonck Lieder” — but don’t skip her contributions to this Bergen Philharmonic Orchestra recording of Sibelius tone poems, lithe and quietly incandescent under the baton of Edward Gardner.

These pieces are treasures buried under the reputation of Sibelius’s greatest hits, though “Luonnotar” for soprano and orchestra, which opens the album, is also rare because of its difficulty. But Davidsen effortlessly traverses its leaps and punishing range, at one point shifting her sound from steely and soaring to exquisitely light and suspended.

She has one other appearance, brief but memorably mysterious, in incidental music for the play “Pelléas et Mélisande.” The rest of the album is purely orchestral, including the late, gorgeous “Tapiola”; the concise, dense “Rakastava”; and “Spring Song,” perhaps that rarest Sibelius treasure of all: a work of unabashed radiance. JOSHUA BARONE

It would be easy to be cynical about the Kanneh-Masons. This septet of British siblings has grabbed media attention and performance opportunities, fueled by the rise of the third-eldest: Sheku, a cellist prominently featured in the wedding of the Duke and Duchess of Sussex.

Easy to be cynical, except that they seem to be such interesting musicians — especially Isata, the eldest and a pianist. Sheku has stuck mostly to the standard repertoire on record, Bob Marley covers aside, but Isata has not. Her debut album, on Decca, was one of the few properly to celebrate Clara Schumann’s bicentennial in 2019.

Her second, out last month, gets no closer to the hits than Barber’s Piano Sonata. And if you could perhaps imagine a spikier approach to that formidable work, she is more than equal to its demands, and her eloquence sings.

Even in Earl Wild’s brazen arrangements of Gershwin’s “Summertime” and “I Got Rhythm,” Kanneh-Mason’s virtuosity has good sense, though Copland’s “The Cat and the Mouse” is played for all it’s worth. There’s a sublime sensitivity and subtle shading to quieter works like Barber’s “Nocturne” and Amy Beach’s “By the Still Waters.” Best are four works by Samuel Coleridge-Taylor, including the premiere recording of his Impromptu No. 2 in B Minor, precious and dark by turn, and a poignant take on “Deep River” that ought to be Isata’s calling card. DAVID ALLEN