The most famous moment from “The Birdcage” is probably the one where Robin Williams gives a bored young hunk a 15-second tutorial in the history of American dance. It’s one of the late actor’s signature scenes. In an uproarious gush of energy, Williams goes from coolheaded nightclub owner supervising a Sondheim number to erudite showman. He demonstrates Bob Fosse, Martha Graham, Twyla Tharp, Michael Kidd and “Madonna, Madonna, Madonna” with the zeal of a gay man who knows a thing or five about art.

While reading a new biography about the director, Mike Nichols, I was amazed to learn that Williams improvised the whole thing during rehearsals. Equally telling is the fact that Williams, then one of Hollywood’s biggest stars, asked to play the more restrained of the two leads. His hyper-theatrical screen partner would spend the final 35 minutes of the film in drag, and Williams didn’t want to retread what he’d recently done in “Mrs. Doubtfire.” So Nichols offered that role to Nathan Lane, a Broadway luminary. It was for the best. Unlike Williams, Lane is gay and could easily grasp the complexities of this particular code-switching.

That’s what “The Birdcage” is about, after all ― gender performance, a topic far less commonly discussed when the movie debuted 25 years ago, on March 8, 1996. Adapted by Elaine May from the 1973 French play “La Cage aux Folles,” it became Hollywood’s first blockbuster to revolve around open, well-adjusted LGBTQ protagonists. Nichols’ film remained No. 1 at the box office for four consecutive weeks, earning $124 million and ranking as the year’s seventh-highest-grossing release. Even with Williams’ name on the marquee, no one expected such success, partly because queer visibility was still a struggle. Ellen DeGeneres and Rosie O’Donnell hadn’t come out yet, and needle-moving television like “Will & Grace,” “Queer Eye for the Straight Guy” and “The L Word” hadn’t premiered. 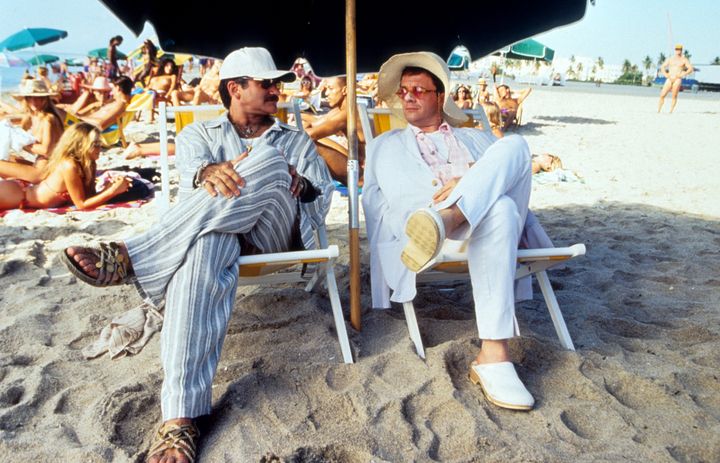 Today, “The Birdcage” holds a knotty place in the queer canon. Its plot, however witty, is dated. A happy couple going back into the closet to impress a bigoted politician (Gene Hackman) whose daughter Barbara (Calista Flockhart) is engaged to their unlikable son Val (Dan Futterman) doesn’t pass 2021’s progressivism test. Some activists, like the writer Bruce Bawer, who called the movie “cruel and heterosexist,” didn’t even think it passed 1996’s test. But it’s more thoughtful than Bawer gave it credit for. (GLAAD agreed, praising the film’s “depth and humanity.” Larry Kramer liked it, too.) Last year’s holiday comedy “Happiest Season,” which employed a similar concept, suggests that code-switching is still a reality, no matter how far LGBTQ equality has come.

The sharp observations in “The Birdcage” are classic Nichols and May, longtime collaborators who refused to over-emphasize themes the way lesser storytellers might have. Take, for example, Hackman’s Kevin Keeley, a Pat Buchanan type who co-founded an archetypal right-wing group called the Coalition for Moral Order. The heartbreak of Armand (Williams) reluctantly agreeing to strip his home decor, send Albert (Lane) away and play straight during Keeley’s visit is accentuated by what a ridiculous person Keeley is. Facing a very ’90s sex scandal, he behaves like a child: irascible, self-centered and addicted to candy.

Even though there’s humor in the scheme to fool Keeley, which also involves 20-year-old Val’s estranged birth mother (Christine Baranski) returning to the fold, the movie never exactly roots for it. Nor does it villainize anyone involved, instead trusting that the audience is intelligent enough to stay loyal to Armand and Albert. 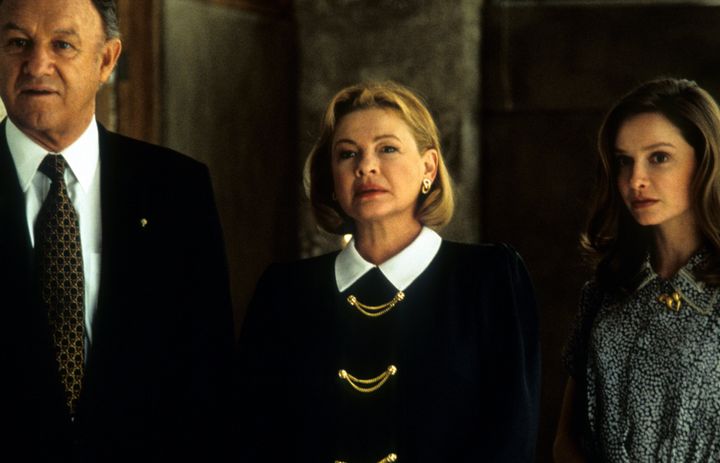 “Yes, I wear foundation,” Armand tells Val. “Yes, I live with a man. Yes, I’m a middle-aged fag. But I know who I am, Val. It took me 20 years to get here, and I’m not gonna let some idiot senator destroy that.” When he eventually relents, it’s because he loves his son and knows how relatively unprecedented Val’s life has been. Most Americans didn’t know any openly gay people at the time, much less understand what it was like to have gay relatives in the era of “don’t ask, don’t tell.”

When Val’s mother gets stuck in traffic and Albert decides to fill the role himself, “The Birdcage” borrows one of the oldest, most reliable comedy tropes: mistaken identity. Seeing Albert arrive at dinner in a Barbara Bush-style wig surprises us as much as it does Armand and Val. One might deem it Shakespearean. But the farce extends beyond cross-dressing. Lane is caricaturing the sort of prim conservative whose vote Keeley would have courted. Keeley is so enamored with her that he’s convinced she’s a scorned housewife disgraced by a pretentious husband, not realizing he is describing his own marriage. “Aristotle Onassis was just like this,” he hisses to his wife (Dianne Wiest, a stealth MVP), referring to Armand.

Keeley’s cluelessness gives Albert the upper hand. Ranting about school prayer and gay military service, he doesn’t clock that Albert is mocking him to his face. Invoking Alexander the Great’s rumored sexuality, Albert exclaims, “Talk about gays in the military!”

The dinner-party ruse lets “The Birdcage” smuggle in some pretty effective ideas about the queer experience. Armand struggling to teach Albert to “pass” for butch is a gleeful indictment of the idea itself; it makes the grunting mannerisms of heterosexual men look absurd. For any gay man who has deepened his voice or thrust his hands into his pockets so they wouldn’t give him away, those absurdities are all too familiar. Plus, Lane is a brilliant comedian capable of embedding both social commentary and interpersonal conflict in his broad physicality. 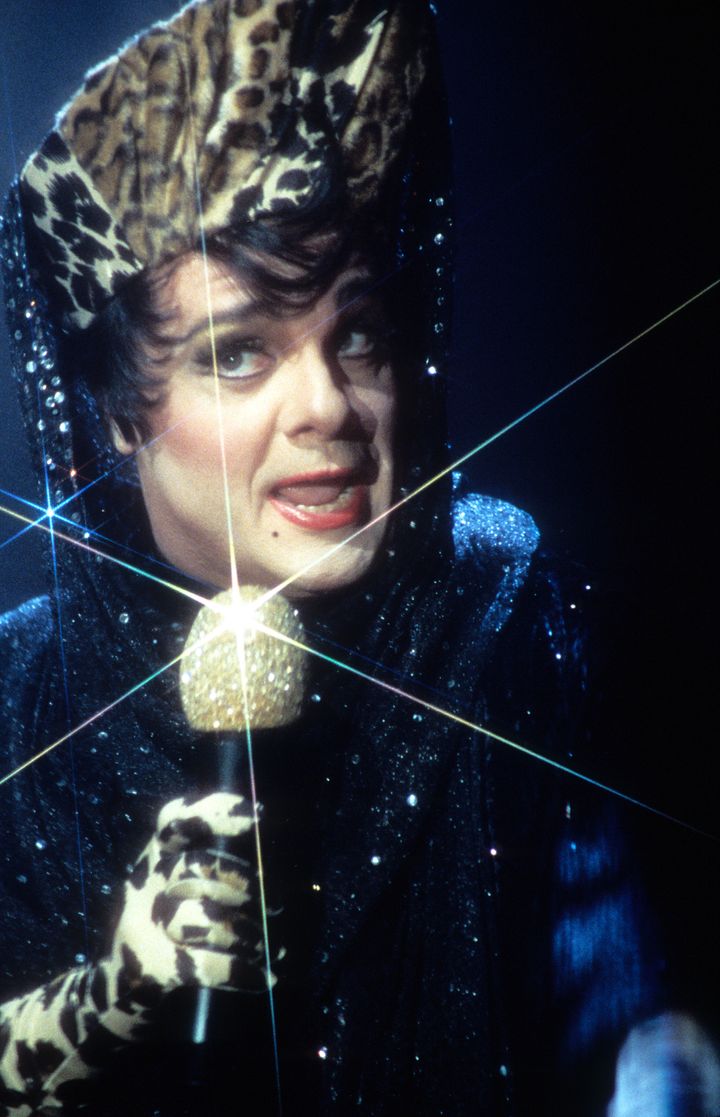 In the end, the tables are flipped on Keeley, rendering Albert the hero. Keeley has to wear drag and slip out of the nightclub in secret to avoid tabloid photographers feasting on his scandal. Lo and behold, while bobbing his glittery shoulders to “We Are Family,” he finds himself smiling. Losing yourself to decadence, the movie confirms, is not some abhorrence. When Val and Barbara wed during the closing credits, Armand and Albert come as they are: proud, affectionate, prosperous and incredibly gay.

If “The Birdcage” were made today, its refusal to let Albert be as peacockish as he pleases wouldn’t sit well. Ditto the hilarious Hank Azaria playing a swishy Guatemalan houseboy. But even if its ideas weren’t all radical, its cultural footprint was. Queerness had thrived in indie filmmaking thanks to directors like Todd Haynes, Gus Van Sant and Cheryl Dunye, but rarely had it made such a dent in mainstream multiplexes — and almost never with a happy conclusion. The following year, “In & Out,” starring Kevin Kline, would be a modest box-office hit. Three years later, “Will & Grace” won the Emmys’ top comedy prize. Shortly thereafter, “Queer as Folk,” “Buffy the Vampire Slayer,” “Queer Eye for the Straight Guy,” “Brokeback Mountain” and “Transamerica” helped the country grasp more of the nuances of queer life. Along the way, marriage equality and anti-discrimination initiatives started to become realities.

It’s hard to say with certainty that one thing wouldn’t exist without something else preceding it, but “The Birdcage” marked a turning point in Hollywood. Armand and Albert showed what’s possible when queer narratives don’t center trauma or disease, and the actors who portrayed them did so with a convincing interiority that pushed past stereotypes. They’re still worth our jazz hands.