Happy birthday to the Queen of Pop! It’s Madonna’s 63rd birthday and this multi-hyphenate star has been serving up show-stopping pop culture moments for decades, wowing year after year on stage, at awards shows, and — recently — even from the comfort of her home as she’s taken on social media. It’s hard to keep track of the many lives Madonna has lived, from her roles in films like Desperately Seeking Susan and A League of Their Own to her industry-shaking 14 albums and seven Grammy wins, all while developing an international reputation for her style and status as a sex symbol. Every time you think you know Madonna, she reinvents herself — and we’re looking back on the many eras of Madonna with this collection of truly iconic photos. 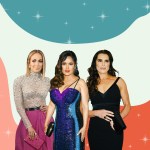 There’s Madonna today, loving mother of six, nonprofit founder, and occasional dancer-on-tables at Manhattan’s Boom Boom Room; there’s “Like a Virgin” Madonna, making jaws drop everywhere at the 1984 VMAs — and of course, kissing-Britney-Spears Madonna, at the same show nearly 20 years later. At the Billboard Women in Music Awards in 2016, Madonna looked out at the crowd of her peers, reflected on her long legacy, and said: “I think the most controversial thing I have ever done is to stick around.” She has always been a woman who controls how she is looked at, and the proof is clear: even now, none of us can look away.

Take a look at some of Madonna’s most iconic moments so far captured below.