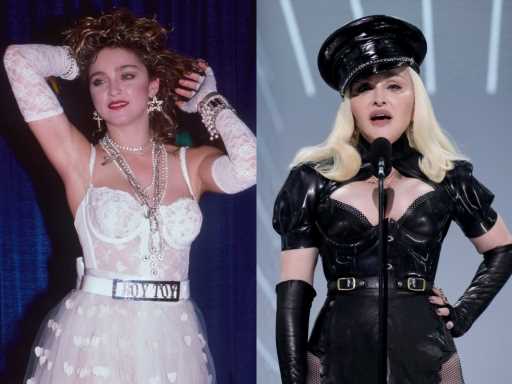 Since Madonna came onto the scene in the 1980s, people haven’t been able to take their eyes off of her. Whether you love her or hate her, Madonna always steals the spotlight. Even if you’re not her biggest fan, you have to admit that her fashion sense is otherworldly, something that really broke barriers in previous decades (and caused a lot of controversies recently!) There’s one thing everyone can admit about Madonna: she is the Queen of the MTV VMAs and always has been.

Ever since her first VMAs in the early 1980s, people always want to know what the “Material Girl” singer is going to rock next. From dramatic period gowns to barely-there outfits, Madonna knows how to keep her audience on their toes. And she’s no stranger to a great costume change. More often than you’d think, she’d arrive at the VMAs in a simple, elegant fit and then come out to perform in a sexy outfit that knocked our socks off. (We have an obsession with her flapper outfit, it’s not talked about enough and her legendary wedding dress look!)

While we eagerly await the next VMAs airing this Sunday, August 28 at 8 p.m. on MTV, let’s take a look back at some of Madonna’s most iconic fashion moments from the VMAs.