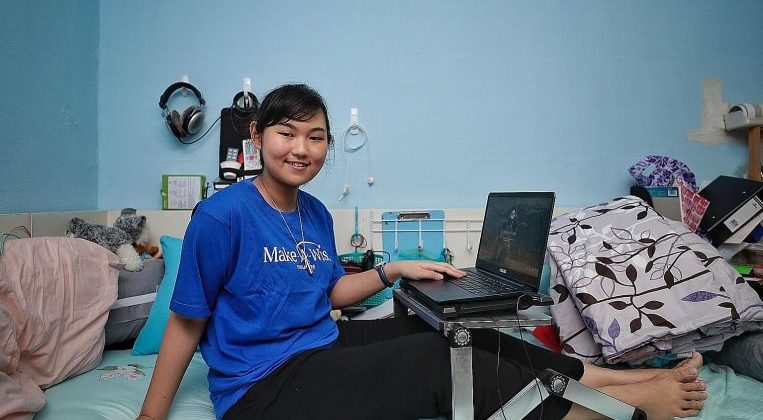 Like many students, Nicole Lim is often expected to give up her seat on a crowded MRT train.

But the 18-year-old is, in fact, chronically ill.

She was diagnosed at the age of 13 with a rare melange of three diseases: autoimmune hepatitis, primary sclerosing cholangitis and ulcerative colitis, in which her immune system attacks her liver, bile ducts and colon respectively.

“My immune system doesn’t like me very much,” she quips dryly.

She tires so easily, she can fall asleep during a conversation; jaundice turns her skin and eyes yellow; and the smallest infection could send her to hospital.

She would rather stand in the MRT, however, than try to explain all this to strangers. “They would argue,” she says. “It would be tiring.”

Nicole has long dreamt of raising awareness of “invisible” illnesses, something that came to pass through Make-A-Wish Singapore, a foundation which grants the wishes of children with life-threatening medical conditions.

With its support, she has published a memoir, How To Be A Good Patient, under the pseudonym Y.K. Riley, with an initial print run of 220 copies.

“I would like people to know more about chronic illness,” she says. “People assume it happens to only middle-aged or elderly people, but it also happens to younger people. You can’t tell someone is sick from the outside.”

She also suffers from other conditions, such as osteoporosis and a genetic blood disorder.

In the book, she writes frankly about a life in and out of hospital – she visits it at least once every three months and sometimes once a month – and what it is like to prepare for a colonoscopy or inhale bitter gas to prevent lung infections.

To be so candid about often painful and embarrassing experiences was difficult, she says.

“But I felt I should put it all down to show what it is really like for patients.”

She is constantly fatigued, a condition she describes using the metaphor of a phone battery. On good days, she wakes up with 60 per cent battery; on bad days, 20 to 30 per cent. Getting ready for school drains her so much, she has trouble staying awake during lectures.

In fact, she says, she often fell asleep while writing the book.

Her illness has caused her to defer her polytechnic studies twice, first in animation, then in law and management.

Earlier this year, she had a liver transplant. The donor was her mother Camie Choo, who, like Nicole’s father, works in the aviation industry. They have an older son, 19.

Nicole had not wanted her mother to risk her life as a donor. It was the first time she cried since her diagnosis, she writes in the book.

Madam Choo, 47, says she is proud of her daughter for writing a book at her age. Some things in the book shocked her, especially a section in which Nicole writes about cutting herself as a pre-teen.

“I am always afraid that I will lose her,” says Madam Choo.

Nicole will be donating most of the proceeds from the book sales to Save Our Street Dogs (SOSD), a dog shelter she has long wanted to volunteer at, but cannot due to the high risk of infection.

She has had two dogs – Fluffy, a Westie who died earlier this year, and Riley, a mongrel adopted from SOSD. Due to her condition, she is now unable to live with Riley, who stays in the family home while she recuperates at a relative’s place, where more people can attend to her needs.

She is adamant that the book has not been written to garner pity, although she finds pity to be better than ignorance as it is a form of awareness.

“I want to be treated like a normal person,” she says. “Just with a bit more understanding.”

•How To Be A Good Patient ($34.90) is available for order from ykriley.com