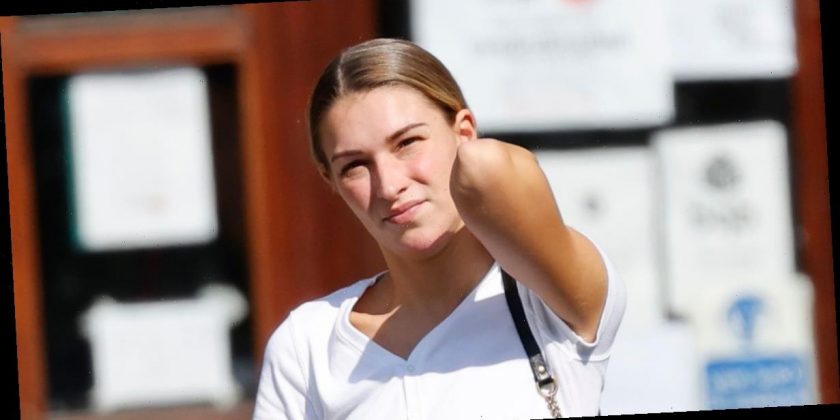 Made In Chelsea star Zara McDermott has been spotted outside in public for the fist time since the news broke that her and co-star Sam Thompson had split.

The former Love Island contestant, 23, went makeup free as she walked through the London borough of Hackney with a friend.

The star looked stressed following the news that she had "cheated" on ex boyfriend Sam, 28.

The beauty, who recently signed with top model agency Storm Models, still managed to look chic on her first public outing, wearing a white crop top which showed off her toned midriff.

She also wore a pair of relaxed tracksuit bottoms and her glossy hair was tied in a loose low pony tail. Last week it was revealed that the reality TV couple had split, and then in the following days a source revealed to The Mail Online that “Zara cheated on Sam with someone in the music industry.

"Someone connected to the X Factor.”

They then continued: “Sam is obviously distraught about this. He only found out about it very recently and has escaped for a few days.”

Reports have now claimed that the ”cheating" scandal will air in explosive Made In Chelsea scenes. It was initially thought her rumoured infidelity took place whilst she starred on The X Factor: Celebrity last year, with it since being claimed she enjoyed a tryst with A&R manager Brahim Fouradi.

Sam and Zara's fallout from the reports will now reportedly air for viewers to see on the next series of their hit E4 show.

An insider said: "The cameras have captured the whole fallout of Zara and Sam's dramatic split.

"It means viewers will get to see the raw emotion caused by Zara's infidelity last years, as Sam tries to come to terms with what has happened.

"There's going to be a lot of tears and rows as Zara fights for her relationship," the source continued to tell The Sun Online.

Sam left immediately after their split to film a celebrity version of Channel 4's The Circle with pal Pete Wicks, with Zara now hoping to prove he can trust her again.

A source had previously told the publication: "Their relationship is hanging in the balance.

"Sam left to film The Circle saying he couldn't be with Zara right now.

"She's fighting so hard to get him back. She's going to do everything she can to prove he can trust her again."