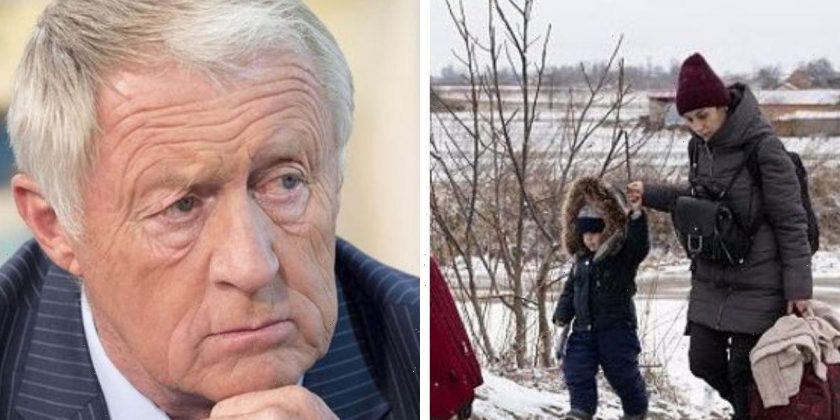 Ukraine's war with Russia could be 'extremely long' says expert

Chris Tarrant revealed that he is currently providing a home to three refugees from war-torn Ukraine, including a recently-born baby. However the former Who Wants To Be A Millionaire? host has also expressed his frustration at the red tape put in place by the British government blocking those keen to help.

You can take money every week to take them, [but] I don’t want any of that – I just want to look after these people

Chris has denounced Russian President Vladimir Putin, who claimed he ordered the Russian invasion in a bid to “de-Nazify” Ukraine, and blasted that he is “worse than Hitler”.

He has now offered three people a home for as long as they’d like to stay, and has refused to accept any cash incentive for doing so.

The TV host delighted in the arrival of the refugees, revealing that the new mother he has taken in is able to converse in English, while the baby talks in “Ukrainian gurgles”.

Chris is less keen on the way the government has organised the system for welcoming refugees, however.

“People are desperate to get into this country and they can’t get through all that red tape,” he mused, revealing that the family he’d taken in had been forced to sleep on airport floors in their urgency to get away from the conflict.

It was revealed that though 150,000 Brits registered their interest in homing refugees, only 6,000 have so far arrived.

Home Secretary Priti Patel was recently compelled to apologise for the hiccups involved in Britain’s Homes For Ukraine scheme, admitting it had been “a victim of its own popularity”.

However Chris commented that he’s been able to bypass some of the rules.

“We sort of managed to short-cut all that,” he explained to The Sun.

“You can take money every week to take them, [but] I don’t want any of that – I just want to look after these people.”

The mother who he and Jane Bird have taken into their Berkshire home has an especially tragic story as she has been ripped away from her husband, just nine months after giving birth to his child.

He has remained in Ukraine to fight and, as aggression from Russian troops increases, it leaves a question mark over whether she will ever see him again.

Chris had been keen simply to send money at first, but then wondered just how much of it would “get through” to those who needed it the most.

When a friend contacted him and asked if he’d like to offer his home to a refugee, he exclaimed that he would “love to help”.

Blasting the government’s “bureaucratic c**p”, he was fortunately able to go ahead and offer his home to a family.

Meanwhile he has shared his contempt for Putin, who accused Ukraine of Nazism, despite the country having a Jewish president, and used the claim as justification for his attack.

He described the Russian leader’s behaviour as “beyond war crimes”.

A leading 72-year-old neurosurgeon, Dr Henry Marsh, recently echoed Chris’s feelings about the difficulties involved in the refugee scheme, telling the world that he felt “helpless” due to the red tape.

However Transport Secretary Grant Shapps, who has taken in three refugees, and former Health Secretary Matt Hancock, who has welcomed seven, have both spoken of their positive experiences doing so.

Shapps stated: “Whilst their country goes through the turmoil of Putin’s war, our country stands resolutely with the people of Ukraine.”