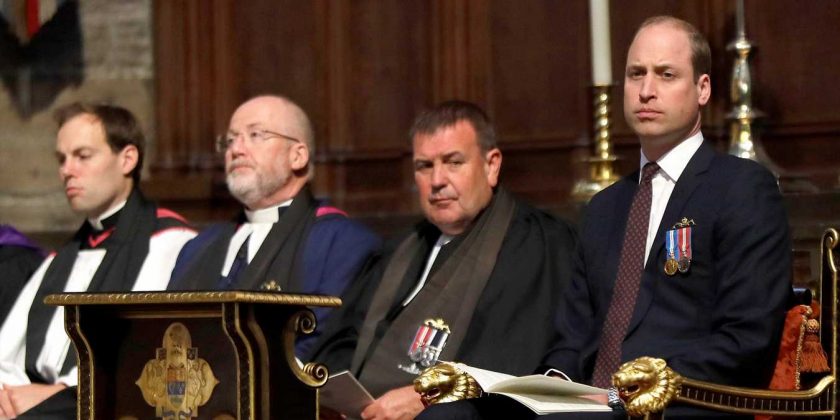 Prince William did not receive the warmest welcome from everyone upon his arrival to an event in honor of the Royal Navy’s submarine service on Friday.

The royal, who has served as Commodore-in-Chief of the submarine service since 2006, attended a service at Westminster Abbey to recognize 50 years of continuous deterrent at sea and the commitment of the Royal Navy’s peacekeeping efforts.

Since April 1969, at least one U.K. submarine carrying nuclear missiles has been on patrol.

Prince William gave a reading from the Bible, and Dean of Westminster John Hall told those gathered, “We pray that the Royal Navy may never be required to deploy these terrible forces in war and that they may continue to deter their use by others,” according to the Washington Post.

Outside Westminster Abbey, however, hundreds of protestors had gathered to denounce the service.

Members of the Campaign for Nuclear Disarmament (CND) chanted “shame on you” as Prince William arrived alongside Penny Mordaunt, in her first official engagement as defense secretary, the BBC reports.

The protestors also laid on the ground acting as if they were dead, a “die-in” to remember nuclear war victims.

Activist Omar Ahmed told the BBC, “I’m surprised that he would come and support something that could destroy our planet.”

Dean Hill recognized during his address that he had been asked by many people to cancel the service, according to the BBC.

The said the service was not a celebration of nuclear power as “we cannot celebrate weapons of mass destruction.” He added, “We do owe a debt of gratitude to those responsible for maintaining the peace.”

Kate Hudson, secretary-general of the Campaign for Nuclear Disarmament, condemned the event as “morally repugnant,” according to the Washington Post.

“This sends out a terrible message to the world about our country,” she said. “It says that here in Britain we celebrate weapons — in a place of worship — that can kill millions of people.”