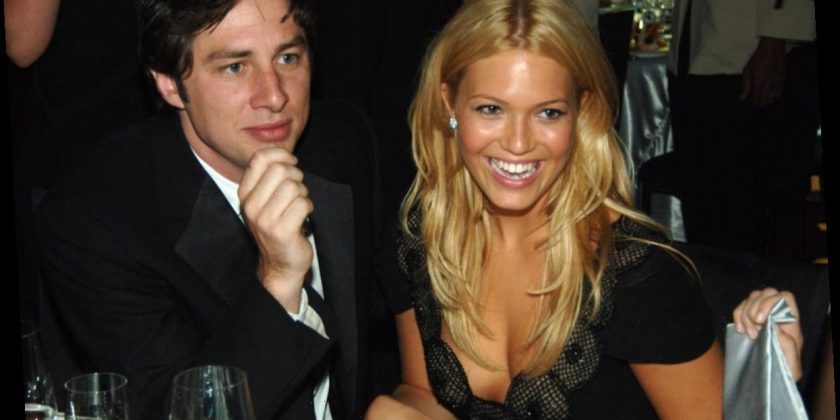 When Mandy Moore and Zach Braff were dating, many were convinced they would be together forever. Unfortunately, their relationship came to an end after just two and a half years. While it’s unclear why the pair called it quits, Moore seemingly hinted in 2007 that her and Braff’s relationship wasn’t perfect, calling their split the icing on a “really bad,” burnt cake.

Mandy Moore and Zach Braff dated in the early 2000s

Though it’s unclear how Moore and Braff met, they were first linked in late 2004.

At the time, both were at the height of their careers. While Braff was enjoying the success of his directorial feature debut Garden State, Moore had just starred in the cult-classic film Saved!

Though there isn’t much known about their relationship, Moore told Cosmopolitan in 2006 that the Scrubs star was just her type.

Moore also mentioned how well her relationship with Braff works, noting it’s great being someone who was in her profession.

Though it seemed like Moore and Braff would be together forever, their relationship came to an end in 2006, after a little over two years of dating.

While it’s unclear what caused the pair to separate, Moore hinted that things between her and Braff didn’t end on a high note on her 2007 album Wild Hope.

“You said you could be good, but somehow you’re guilty. And you’re not even sorry,” she sang in the song “Ladies Choice.”

Following the album’s release, Moore opened up about her split from Braff during an interview with Marie Claire (per People), calling it the icing on a “really bad cake. The burned cake.”

A few months prior, she shared that the breakup may have exacerbated her depression.

“A few months ago I felt really low, really sad – depressed for no reason,” she told Jane magazine (via People) in January 2007. “The breakup added to what I was going through, but it’s not the complete reason. It definitely doesn’t help if you’re already in that place.”

Both actors have since moved on with other people

Following his split from Moore, Braff began dating model Taylor Bagley in 2009. The two were together for five years before calling it quits in 2014.

In 2019, the actor struck up a relationship with Black Widow star Florence Pugh, who he is still dating today.

As for Moore, she moved on from Braff with singer Ryan Adams in 2008. After dating for about a year, the two became engaged in February 2009 and married on March 10, 2009, in Savannah, Georgia.

However, their marriage only lasted a few years as Moore filed for divorce from Adams in January 2015, citing irreconcilable differences. Their divorce was finalized the following year.

After calling it quits from Adams, Moore began dating singer-songwriter Taylor Goldsmith. The two became engaged in September 2017 and married on November 18, 2018, in Los Angeles.

In February 2021, the couple welcomed their first child together, a son named August Harrison Goldsmith. The This Is Us actor announced the exciting news on Instagram by sharing a photo of their newborn.

“Gus is here. Our sweet boy, August Harrison Goldsmith,” Moore captioned the post. “He was punctual and arrived right on his due date, much to the delight of his parents. We were prepared to fall in love in all sorts of brand new ways, but it goes beyond anything we could have ever imagined.”