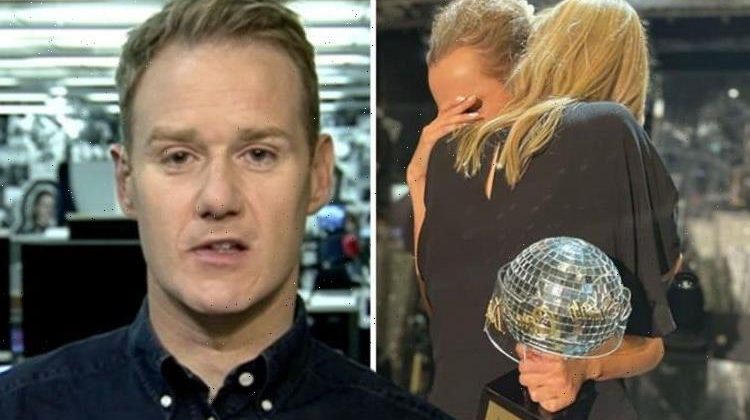 Strictly: Rose and Giovanni are crowned the winners

Dan Walker, 44, was inundated with messages after the BBC Breakfast presenter addressed the real reason he had been voting for Rose Ayling-Ellis to be crowned Strictly Come Dancing champion. It comes after the EastEnders actress made history as the first deaf winner of the BBC show last night.

Dan, who was partnered with Nadiya Bychkova, took to Twitter to pen an emotional post about the Strictly winner today.

In view of his 740,000 followers, the presenter shared a sweet photo of Rose crying into her mum’s shoulder, while holding the Glitterball trophy.

He wrote: “Of all the photos from last night… this might be my favourite.

“Rose’s mum knows how hard she has worked, how many barriers she has had to run through, how many times she has been told ‘no’ and how much all this means.

“This is why I voted for Rose & Gio from week one.”

Strictly judge Motsi Mabuse was one of the first to reply, saying: “Dan this literally made me cry again.”

The BBC presenter commented: “Me too Motsi. Thanks for everything this series. What a show and you looked great last night.”

Twitter user Julie Simpson remarked: “You’ve set me off again! Didn’t think I had any tears left after last night! Fantastic show. Just what I (and everyone else!) needed!”

Maggie Jones wrote: “Every time I watch them dance or just watch them together I cry, they have been too special together.”

Fiona commented: “Well that started me off again. I have loved her since her first dance. She has a lovely personality and is so funny. Their relationship has been amazing and built on trust and respect. Finally, Giovanni has won it!! Just been a lovely season and breaking down all barriers.”

“Dan this has me really emotional. We do have to fight for our young people who may be a little unique – achievements like this mean the world and beyond. Rose is a stunning role model for all young people,” Sarah Page added.

Reacting to their win during last night’s show, the actress told Giovanni: “I just want to say you’re so amazing, you pushed me to believe in myself more than I believed in myself.

“You’re an incredible teacher and a wonderful friend and we have gone through a lot, and I just want you to know you’ve always got a piece of my heart.”

The Italian dancer commented: “Incredible. I have to say thank you to this beautiful young lady who made all my dreams come true.

“It took me seven years to get that thing and you became the best dancer, the best teammate I could have asked for, you are a dream so thank you for everything.”

Meanwhile, Dan previously revealed that he had been voting for Rose throughout the competition.

The BBC host, who became the 10th celebrity to be voted off Strictly, said he had been voting for his co-star in secret.

The broadcaster explained that his dad is also deaf and understands “how hard it is to dance”.