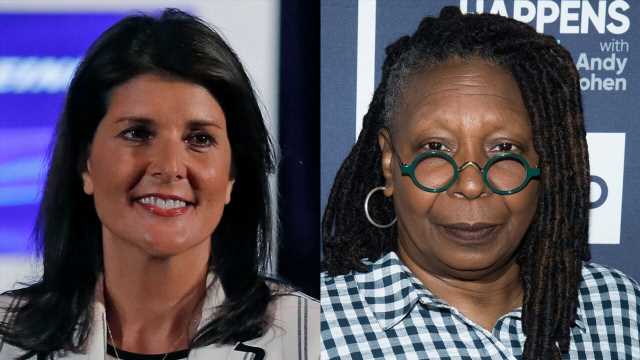 "The View" co-host Whoopi Goldberg slammed former U.S. ambassador to the United Nations Nikki Haley on Tuesday for her remarks knocking abortion activists who expect that all women should be pro-choice, telling her and pro-life lawmakers, "I don't want you in my coochie!"

In a speech she made at the Susan B. Anthony List’s Life Gala, Haley defended her stance in the abortion debate and how liberal activists "demand conformity."

"Women are expected to support choice simply because we're women. That's just wrong," Haley said. "We all have to be true to ourselves and to others. Unfortunately, many on the left use the abortion debate to divide women and demand conformity. They do this in the name of feminism. But that is not real feminism."

Goldberg, however, took exception to the former South Carolina governor.

“So let me get this straight, so giving a woman a choice about what to do with her body is anti-feminist?” Goldberg asked.

"You have the right never to have an abortion. You have that right. And I support that. But what about the nine-year-old girl who gets raped by a family member or some thug in the street? Why are you taking her mother's discussion with her family, what their choice is? Why are you taking it out of their hands? See, you taking choice away from people is anti-human."

The liberal TV host insisted she was "pro-life" and that she wants everyone "who wants to do this to have life," but added if a woman wants to have an abortion, "she's going to do it" and that shutting down clinics will only make it "more dangerous."

“I don’t say that everybody has to believe, but I say you want to have a choice, I don’t want you in my coochie!” Goldberg continued. “You don’t want me in yours either.”