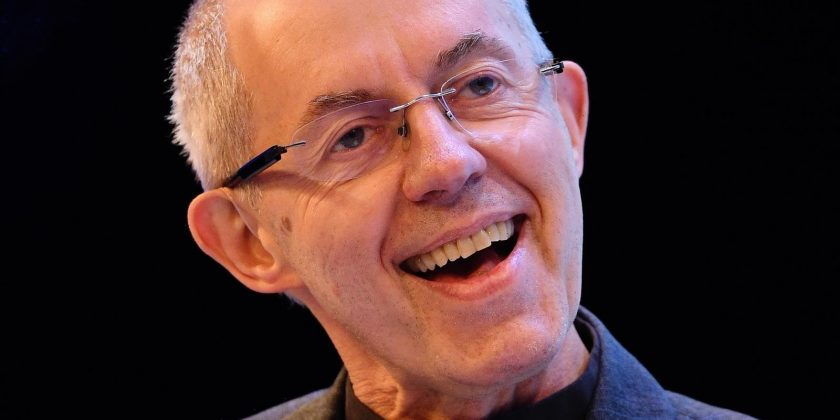 The United Kingdom is officially in mourning right now over the death of His Royal Highness Prince Philip, also known as the Duke of Edinburgh, and husband of Queen Elizabeth II for 73 years, the longest of the nation’s consorts (aka the name of a reigning monarch’s spouse, via CNN). The royal family member died in his sleep at age 99 on April 9, 2021, just two months short of his 100th birthday, which would have been in June. His funeral service is scheduled for Saturday, April 17, 2021, and will be a traditional but comparatively low-key affair given the current restrictions brought on by the COVID-19 pandemic. ITV reports that the funeral will be presided over by the Archbishop of Canterbury, Justin Welby.

According to Historic UK, the Archbishop of Canterbury is the highest position in the Church of England, serving as the ‘primate of all England.’ He ranks highest after the royal princes, and has the ability to crown kings and queens of England. Officially, his residence is at Lambeth Place in London, with a secondary residence at the Old Palace in Canterbury. The current archbishop, Justin Welby, has been in the position since his enthronement in March 2013. He is the 105th person to serve as Archbishop of Canterbury since the tradition began in the year 597.

In preparation for Prince Philip’s service, let’s learn a little more about the Archbishop of Canterbury, Justin Welby.

Archbishop Welby had a political affiliation and a surprising parentage

Justin Welby’s parents welcomed him into the world “almost nine months to the day” after their marriage, Welby’s mother Jane told The Guardian in April 2016. She worked as a personal secretary to then-prime minister Winston Churchill, but when she married Gavin Welby, he insisted that she leave the position. Jane says they had “a short and, sadly, dysfunctional marriage,” as they both struggled with alcoholism, and in fact, the disease ultimately killed Gavin in 1977. But during their three-year marriage and the many years that followed, the couple never doubted that they were Justin’s parents.

However, in 2016, based on research from the Daily Telegraph, Justin decided to take a paternity test that told a different story. Mother and son were both shocked to learn that the test showed a 99.98% probability that Justin’s father was, in fact, Churchill’s personal secretary, Sir Anthony Montague Browne. Feeling that she owed her son a full explanation given his high-profile position, Jane revealed that she had had an affair with Browne “in the days leading up to my very sudden marriage” to Gavin, one that was “fueled by a large amount of alcohol.”

While it gave the Archbishop a shock, and concern that his position might be at risk, a check of canonical law established that he was safe in the Church. And he himself does not doubt it: “I know that I find who I am in Jesus Christ, not in genetics, and my identity in him never changes.”

Archbishop Welby delayed his calling to work in the oil industry

Justin Welby heard his calling to the Church when he was 19 years old and a student at Trinity College in Cambridge. He told the Telegraph that, when he studied at Eton, he “vaguely assumed there was a God,” but one night in Cambridge in 1975, he felt “a clear sense of something changing, the presence of something that had not been there before in my life.”

Yet, despite this change in his perception, Welby finished his degree in history and law, and then started working in the oil industry, rather than studying to be ordained. According to BBC, Welby worked for Elf Acquitaine, a Paris, France-based oil company, and eventually became treasurer of Enterprise Oil, a European independent exploration and production company, in 1984. There he worked with West African and North Sea oil projects and gained experience in international relations, including with the Middle East.

Welby ended his 11-year oil industry career in 1989 when he finally chose instead to listen to his calling. He gave up a £100,000 annual salary (per BBC) to study theology at St. John’s College in Durham. He graduated, and was ordained in 1992. After serving as a canon of Coventry Cathedral, where he performed reconciliation work in Africa and the Middle East, and was installed as Dean of Liverpool Cathedral in 2007, he eventually made his way back to Durham, where he was appointed bishop in 2011. However, the young talent was bishop for less than a year before being considered for the archbishop role.

Archbishop Welby loves working with people for peace and reconciliation

In his first 18 months as Archbishop of Canterbury, Justin Welby and his wife Caroline, whom he married in 1979, traveled to every province of the Anglican Communion. Traveling to some 41 provinces, in countries from Argentina and Australia to Zambia and Zimbabwe, involved 96 travel days, according to the official Archbishop of Canterbury website. He continues to visit places in the Anglican Communion in his efforts to pursue reconciliation and peace in areas of conflict, and to spread his three personal priorities. As he describes in his vision for the future, “The Church transforms society when it takes the risks of renewal in prayer, of reconciliation, and of confident declaration of the good news of Jesus Christ.”

Welby has also visited provinces in his jurisdiction in the southern part of England, taking part in activities “from baptisms to baking competitions, visit[ing] schools and food banks, and pray[ing] with people in skate parks, shopping centers, and hundreds of churches.” It’s clear he enjoys his work bringing people into the Church, and he once rang John Lennon’s “Imagine” from the bells of Liverpool Cathedral while he was Dean there to encourage non-members to come to the church (via BBC). He loves “working cross-culturally,” meeting “the most amazing people,” and having “the most wonderful conversations, which leave [him] gasping for air because it’s such a privilege to be involved in that way.”