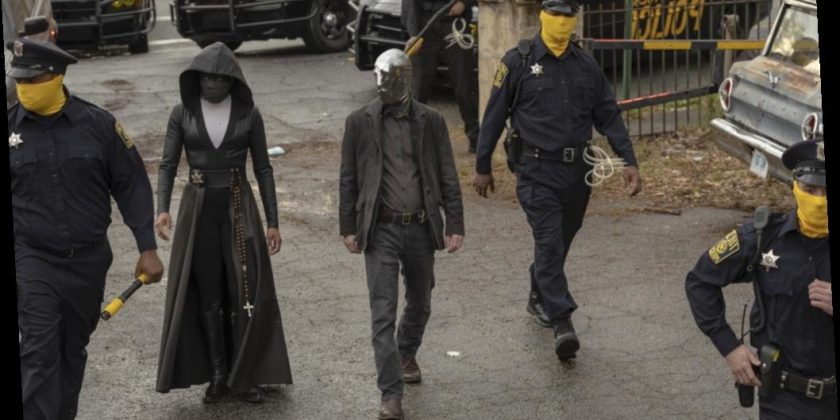 Except for an out of focus poster in a Tulsa school room, the Oscar winner is never seen on-screen in HBO’s Watchmen. However, Redford’s multi-term Presidential shadow is an ominous specter in a sometimes shambolic and yet spectacular show full of shadows, good intentions gone wrong, mad trillionaire, and masks, literal and figurative.

Ardent series creator Damon Lindelof’s October 20 debuting self-described “remix” of Alan Moore and Dave Gibbon’s palpitating and iconic comic series from the 1980s doesn’t seek to dissect the superhero genre as much as dig up the brutal roots in the American soil. As the Regina King-led Watchmen makes perfectly clear, to quote Richard Nixon: when you dig up the past, their sins come bellowing back to embody the present.

Following the faked alien invasion that curtailed a superpowers’ nuclear war in the Watchmen comics, this provocative sequel of sorts Watchmen is set in the Tulsa, Oklahoma of a 2019 America that is very different from our own and so very similar.

It’s an America where the extremely liberal Redford has ruled for decades, a green deal of sorts is in place, the distraction of the Internet and smartphones are absent and guns are strictly curtailed. Literally pulled by Lindelof from the pages of a Ta-Nehisi Coates article, it is an America striving to reconcile with atrocities like the officially sanctioned 1921 massacre of hundreds of African-Americans and the destruction of what was known as Black Wall Street. This slightly shoddy progressive’s wet dream is also an America where reparations AKA “Redfordations” fuel the hate of the right, the show within a show American Hero Story is on everyone’s TV and the often maladroit police wear masks after being nearly slaughtered by a white supremacist group known as the Seventh Kavalry, whose return after several quiet years incites the nine-episode first season.

Once again making it clear that she is one of the great actors of our time, King strides into that morass as the scarred Angela Abar, a Tulsa detective who carries out masked justice as Sister Night. To that end, there are a fair number of expertly choreographed fight scenes where an African-American woman kicks the crap out of racist asswipes in a way that should make everyone’s ancestors proud. Drawing intentionally or not from the spirit of the Gibbons and Frank Miller created Martha Washington comics that debuted in 1990, there is also a warrior’s journey to be had for Angela and King masterfully leads us on that path as only the best of the best can.

Stung by corporate politics in the past, the brambly Alan Moore won’t even allow his name on this latest adaptation of one of his works. And, as they are prone to do, purist fans of the comics may dismiss the whole thing without a glance. Regardless, let me tell you as someone who marveled over Moore and Gibbons genius back in the dying days of the Reagan Era, you are going to have to either have read or take a gander of the original Watchmen comic series to have any idea what is going on here in the nine-episode series from the Lost and Leftovers boss.

Then, like Dr. Manhattan looking back at Earth from his sanctuary of Mars, you are going to have to shift your POV at least 290° away from all that to see that the heart of this Jeremy Irons, Louis Gossett Jr., Legion’s Jean Smart, the wonderfully slippery Don Johnson, Tim Blake Nelson, Steven Norfleet and Hong Chau co-starrer is the perpetual American question of race, racism and nostalgia, which is a literal and figurative drug here.

Hoisted on its own expectations in a small screen landscape scattered with revivals and reboots, this Watchmen is much less of a dog’s breakfast than Moore’s mammoth Jerusalem novel and far meatier than Zack Snyder’s 2009 Watchmen movie or the prequel and the recent DC Universe Doomsday comics of the WarnerMedia controlled property. Yes, this is another case of a white boy leading the charge on tragedies and great injustices that may be new to him but well known to many people of color, directly or indirectly. Nonetheless, and I say this as another white boy, Lindelof’s aim is true with a far from recondite narrative that harnesses the mask of genre to tell a tale of our time and of America’s true history.

To that long game, woven irregularly here and there with aspects of the original Watchmen and like the homemade masks the bigoted Kavalry members wear based on the maladjusted Rorschach character of the comics, this Watchmen is more a fierce blaze than the slow burn that too-often exemplifies current prestige television.

Destined to pull many viewers way out of their comfort zones, HBO’s newest big budget offering lacks the swinging swords of Game of Thrones, but ultimately cuts far deeper in its opening moves.

Shifting to the NYC of 1938, mesmerizing tactics and the birth of a not so golden age of costumed heroes, the exceptional Stephen Williams directed sixth episode pulls the pin on any warmed-over notion of how great America used to be and kicks the booster rockets for the last act. Slide in a parallel plotline of a scene feasting Irons’ clearly playing the now elderly and exiled but still scheming Adrian Veidt/Ozymandias of the comics and you have yourself a saga about the extraordinary in a history of human degradation and masked truths that we have too often come to accept as ordinary in this country.

Now, Lindelof has hinted that the first season of Watchmen is a complete story and could end up as a one and done. That’s an appreciated consideration, but unlikely to be the case as WarnerMedia and HBO seek to fill the Game of Thrones gap now the blockbuster series is over and the AT&T-owned unit seeks to ramp up its HBO Max streaming game for next year.

Deep within the first season, Irons’ as yet unnamed Veidt says to one of his household staff that “to be alive you have to have purpose and you have none.”

Shoveling deep into the American dream and nightmare, Watchmen has purpose to burn.

Now, cue the storm of squid and vote Redford 2020