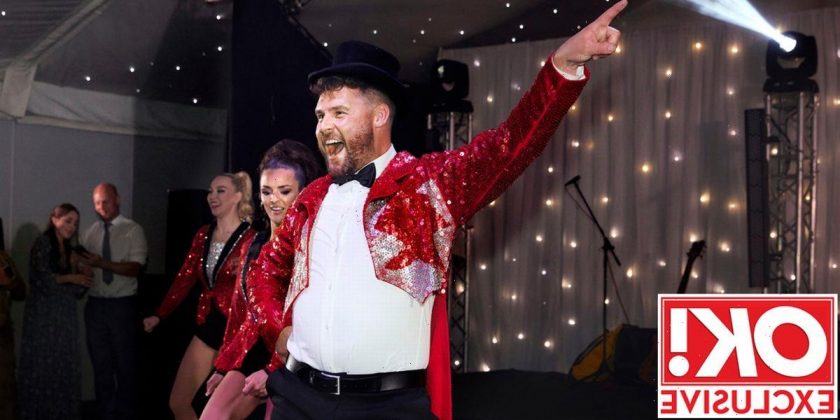 And the event, exclusively covered by OK!, wasn't without its surprises – and the first dance with a difference has to be one of the highlights of the main wedding celebration.

In our exclusive video of the first dance the couple start off by swaying lovingly to From Now On, the hit anthem originally sung by Hugh Jackman from film musical The Greatest Showman.

After many kisses and twirls in their romantic dance, the video shows Steph exiting the stage as the musical interlude begins and the singer asks the guests to start clapping their hands.

As the tempo picks up the former Emmerdale actor looks confused as his bride is nowhere to be seen and even checks behind the draping curtain at the back of the beautifully lit dance floor.

A bewildered Danny starts checking his phone and appears to ring someone as he tries to find out what's going on. He then disappears off the dance floor as the singer continues belting out the hit, while guests wait in anticipation, filming on their phones.

As the chorus begins, the curtains fall to the floor showing Danny and Steph transformed from their dress and suit into Greatest Showman attire – matching sparkly red jackets with bow ties, Danny in a top hat and bride Steph in hotpants.

They are accompanied by dancers and singers, who too are in matching dress.

The newlyweds join in the dance routine, while Danny grabs his new bride for a spin in the air. The accompanying dancers then take to the floor for some breakdancing tricks, while Steph quickly takes pride of place with a show-stopping 'worm' dance move.

The performance wraps up with some more singing and dancing, before their nine month old son Albert joins them at the end of the video for some cuddles with his mum and dad.

Speaking of the incredible routine, Danny and Steph told us how special they found the experience and the meaning of The Greatest Showman to their relationship.

“After actually getting married that was the best thing of the wedding for me,” said Steph. “We only rehearsed it twice. I was nervous but when the curtain dropped I just thought, ‘Wow! I’m going to go for it.’ The whole thing was Danny’s idea.”

“I didn’t want to do a slow, awkward first dance,” he explained. “This was perfect and exactly what we wanted. We fell in love with The Greatest Showman after watching it on holiday in a silent cinema while Steph was pregnant. It’s very fitting for us as a couple as in the film they’re together when they’re younger and then they got back together.”