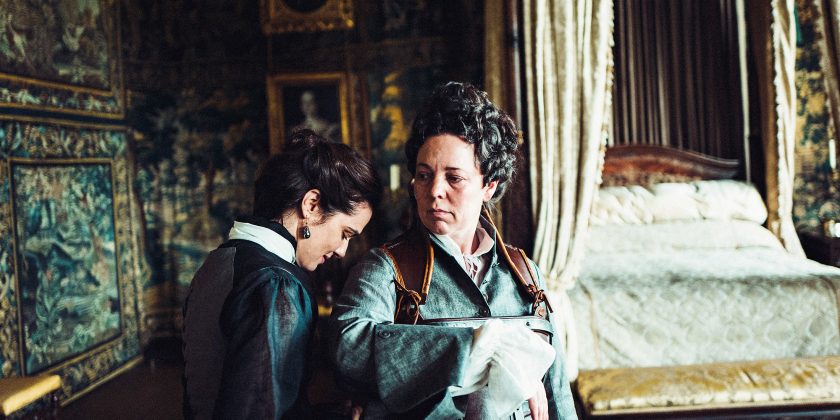 The Favourite (in theaters now), tells the true story of two cousins vying to be the court favorite during the reign of Queen Anne in 18th century England.

In the film, Anne (Olivia Colman), who is in frail health due to gout, relies heavily on her adviser and secret lover, Sarah Churchill, the Duchess of Marlborough (Rachel Weisz). Sarah has major influence on how the Queen rules the country — that is until the arrival of Sarah’s younger cousin, Abigail Hill (Emma Stone), who charms her way into the Queen’s good graces — and her bed.

“Yorgos wasn’t interest in us doing tons of research and then showing up on set and saying, ‘No, my character wouldn’t do this because my history book told me she was like this,’ ” she tells PEOPLE. “The story is based on fact, but it’s also an act of imagination and particularly, his imagination. I surrendered to his version of the story.”

“I was fascinated by the portrayal of the times,” Weisz adds. “Everything that women had to go through for power back then — which I think is one of the themes of the movie — it’s just utterly fascinating.”

So how much of the period dramedy is fact, and how much is fiction? Here’s a deep dive into the historical accuracy of the film.

Was there really a court “favorite”?
During the time of Queen Anne’s reign, it was common for a monarch to choose a favorite within her court. The court favorite was typically given political power and major influence over the crown and the country.

In real life, Queen Anne and Sarah Churchill (an ancestor of Winston Churchill) met as children and grew up as close friends and confidants. When Anne became queen in 1707, she made Sarah the Keeper of the Privy Purse, and awarded Sarah and her husband, John Churchill, the titles of Duke and Duchess of Marlborough. They were even given parliamentary pensions.

“When Anne became queen, Sarah expected to be in a position of enormous political influence,” Anne Somerset, author of Queen Anne: The Politics of Passion, told the BBC.

Was Queen Anne in ill health?
The monarch, who only ruled for 12 years, endured poor health most of her life. She suffered from gout — a form of arthritis characterized by severe pain, redness, and tenderness in joints — and even had to be carried to her own coronation in a sedan chair. Like in the film, she also had to use a wheelchair. Due to her inactive lifestyle, she gained weight in her later years. Anne died after suffering a stroke at the age of 49 in 1714.

RELATED: This Is Why Queen Elizabeth I Died a Virgin at Age 69

Anne also suffered several miscarriages. She was pregnant a total of 17 times: 12 were miscarriages or stillbirths, four died in their early years (or even within minutes of being born) and her one surviving son, Prince William, died at the age of 11. In the film, Anne’s miscarriages are represented by her 17 fictionalized pet rabbits that she dotes on in her bed chambers.

Was Queen Anne ever married?
Although not mentioned or portrayed in the film, Queen Anne had a strong marriage to Prince George of Denmark. He died six years into her reign in 1708, leaving the monarch devastated, according to historic accounts.

RELATED: The Crushing Reason Queen Elizabeth I Caked Her Face with White Makeup

Was Queen Anne caught having a lesbian affair?
According to accounts from the time, Anne and Sarah were inseparable. Their devotion to one another was evident in passionate letters they exchanged over the years. While the details of their relationship was largely fictionalized in the film, rumors that the two women had a secret romance were prevalent during Anne’s reign.

“The question of whether Queen Anne was a lesbian is a very interesting one. If you read the letters she wrote to Sarah as a young woman they are passionate outpourings of devotion. You might immediately think perhaps they were having an affair,” Somerset told the BBC.

“Yet as things soured [between Anne and Sarah], Sarah began to spread rumors that Anne had a relationship with the woman who ousted her as royal favorite, Abigail.”

Who was Abigail Masham (née Hill)?
When Sarah’s younger cousin, Abigail, came onto the scene, she initially aligned herself with Sarah. Sarah even introduced Abigail to the queen, hoping to secure her a position within the court as a bedchamber woman. But when Abigail began to grow closer to Anne, it resulted in tensions between the three women. Sarah was even believed to have retaliated, spreading rumors of an affair between Anne and Abigail.

In 1707, a political writing believed to be written by a close friend of Sarah’s, politician Arthur Mainwaring, hinted at the romantic relationship between Anne and Abigail. It was even circulated by Sarah herself, according to Political Passions: Gender, the Family and Political Argument in England, 1680-1714.

“However for sweet service done / And causes of great weight / Her royal mistress made her, Oh! / A minister of state

Sarah also threatened to release her own letters from Anne, which included such lines as: “If I writ whole volumes I could never express how well I love you. . . . Unimaginably, passionately, affectionately yours,” according to Somerset.

Did Abigail poison Sarah?
In the film, Abigail poisons Sarah with tea, which leaves her gravely ill but doesn’t kill her. But that incident didn’t actually occur. In real life, Sarah was stripped of her offices in 1711, and Abigail was made Keeper of her Privy Purse. Disgraced, Sarah and her husband, John, left England and settled in Germany. After Anne’s death, they moved back to England, where John became a close adviser to the new monarch, King George I.

Following Anne’s death, Abigail retired into private life and lived a quiet country life until her death in 1734.