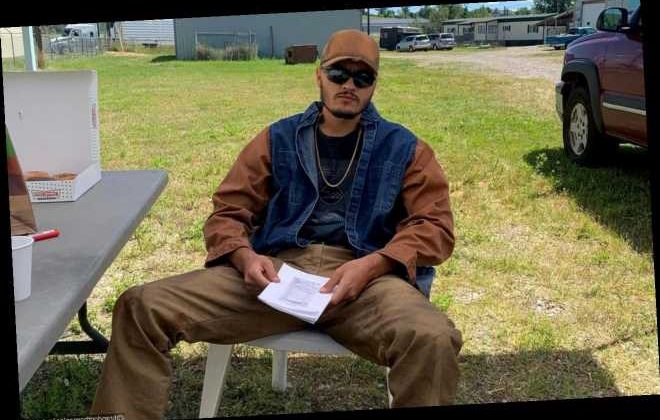 Brandon Lee Thomas, whom the former ‘Baywatch’ star shares with her ex Tommy Lee, shares a video of him confronting a man whom he claims breaks into his house.

AceShowbiz –Pamela Anderson‘s son Brandon Lee Thomas has thwarted an intruder with a golf club. The 24-year-old actor and model revealed on Instagram that a man broke into his house, but he managed to scare him away with the sports equipment.

Brandon posted on his account on Monday, January 25 a video of the encounter with the alleged intruder. In the clip, he was seen holding the seven-iron golf club while threatening the man whom he claimed broke into his home.

“If you ever come into my f**king house again, I will beat your f**king skull in,” Brandon yelled at the stranger while they’re already outside. The man claimed that he mistook Brandon’s house for his acquaintance’s. “Dude, I thought you were the lawyer that I know,” the alleged intruder insisted.

Brandon, who is the eldest of Pamela’s two children with her ex Tommy Lee, didn’t seem to buy the man’s explanation though, shouting, “Who the f**k? Do I look like a f**king lawyer? Get the f**k out of here!” The man eventually got into his van and left the compound.

In the caption, Brandon shared more details of the encounter with the alleged intruder. “This guy full on BROKE INTO MY HOUSE and then sneaks up on me in my kitchen, starts screaming at me, and after tries to tell me that he thought I was a lawyer he knew…. so I had to show him my good ol 7 iron,” he wrote, before adding in the comment section, “DO I LOOK LIKE A F**KING LAWYER?!?”

Some of his followers responded to the video with humor. “I like how you grab the golf club,” one person commented on the post. Another jokingly speculated, “His lawyer was there a year ago though.”

Some others, meanwhile, expressed their concern over the incident. “White vans. No windows. Newp!” one person wrote, suggesting that the man came with bad intention judging from his vehicle. Another shared, “damn, glad you’re alive dude. gotta heighten up the security.”