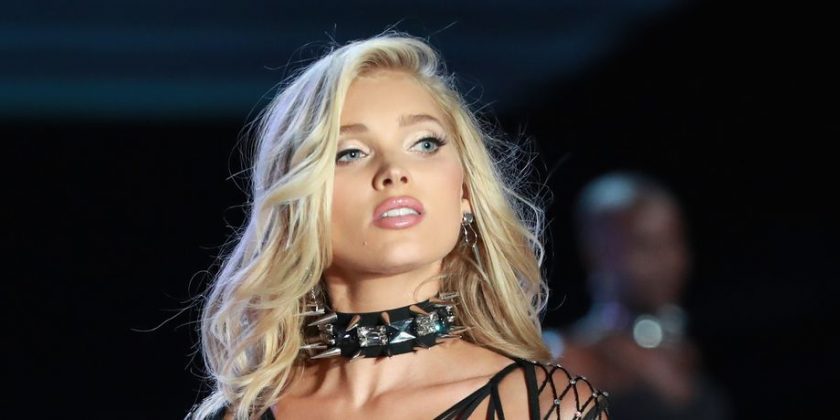 Elsa Hosk took to her Instagram page on Friday to share a sultry snap of herself rocking a black dress that showcases her formidable body.

In the snap, the 30-year-old stunner is featured in a tiny dress that accentuates her long, toned legs and that displays some cleavage as its plunging neckline reaches down to her stomach, sitting just above the bellybutton. One of the straps of the dress is off her shoulder, which gives the shot a relaxed, yet sexy quality. The Swedish model paired her basic black dress with a pair of black calf-length boots that she left untied, for a casual look. Hosk also has on a black jacket, which she is wearing off the shoulders, held together just by her arms.

The supermodel is posing in front of a wall with her arms crossed and right left leg propped to the side in a way that shows off her inner thigh muscles. Hosk is wearing her blonde tresses down, which fall down to about shoulder length. The model is wearing light-colored makeup consisting of nude lips and a fine black eyeliner to contour her eyes.

In the caption, the model explained that she took the polaroids at 7 a.m. in Miami, paired with the hashtag “Woke up like this” and the sleeping emoji.

Hosk shared two snaps in the same post. The second photo shows her in front of the same wall but in a different pose. She is leaning against the backdrop again with her arms crossed but this time around, she positioned one leg in front of the other. In both shots, she is looking straight into the camera with lips slightly parted in a seductive way.

The photos, which Hosk shared with her 4.9 million Instagram photos, garnered nearly 70,000 likes and more than 230 comments in just over an hour after being posted at the time of this writing.

“Love you queen,” one Instagram user wrote, while another added, “Serious wife goals.”

Hosk, who is the latest wearer of the famed $1 million Atelier Swarovski Fantasy Bra, recently shared that she amped her fitness routine ahead of the Victoria’s Secret Fashion Show earlier this month, as Harper’s Bazaar pointed out. The supermodel admitted that she likes to “mix it up” to keep thing interesting.

“I love boxing, and I try to mix it up as much as I can. Boxing makes you kind of tight, so it’s really good to mix that with barre, pilates, or something that’ll stretch you out and make you longer,” she said, according to the report.