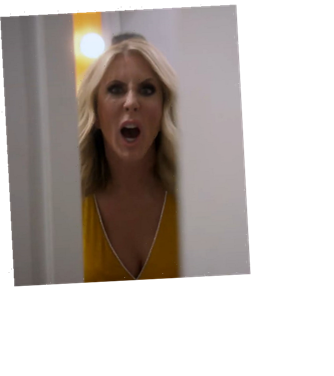 Season 15 of The Real Housewives of Orange County had catastrophic ratings and was frankly a little boring.

Though most blame the pandemic, some questioned whether Vicki Gunvalson needed to return.

It turns out that she was slated to be part of a franchise spinoff, one that we recently reported on.

But Vicki got axed from the project, and now the fallen OG is royally pissed.

Last month, we reported that Bravo is launching a new Real Housewives spinoff with ladies from different cities.

The idea is that these Housewives would film on vacation in an exotic location, akin to the group trips each season.

These all star Housewives could presumably be current and former stars alike.

It initially seemed like an ideal way to film during COVID, since the ladies would be in just one place.

However, it turns out that the project was conceived before the pandemic.

In fact, Vicki Gunvalson was apparently going to be a part of it.

Tamra Judge invited fans to ask her questions on Instagram.

One message that Tamra posted wasn’t even a question.

“Repost if you think it’s bulls–t Vicki isn’t on HW spinoff,” the fan wrote to Tamra.

Tamra published it, showing her solidarity with her on-again, off-again friend.

“It’s bulls–t!” Vicki declared in agreement in a public comment.

“I had the [contract] signed by both parties in [February] then Covid hit … then crickets,” she described.

Page Six shed a little more light on the matter.

An inside source confirmed that Vicki was originally slated for the spinoff, which will air on Peacock (NBCUniversal’s streaming service).

However, the network reportedly informed Vicki when they decided to not include her.

“She should be very grateful that her contract is null and void,” the insider suggested.

The source explained “because now she’d be in breach of her contract.”

Of course, perhaps Vicki wouldn’t have said anything at all if she were still contracted.

While Bravo has not confirmed the cast for the spinoff, which is said to begin filming in April, there are names being circulated.

As we mentioned, for the past few weeks, most fans assumed that this spinoff was recently conceived.

2020 saw numerous businesses adapt to the pandemic, with many office workers working remotely.

A remote mansion where a group of Housewives could gather after two weeks of quarantine and only be around each other would have worked.

But Vicki’s bitter announcement confirms that this has been in the works for a while.

Honestly? An all stars Housewives spinoff was always a good idea. Was the deal pitched at Bravocon?

It is unclear what may have pushed the network to move in a “different direction” from Vicki.

One theory is that, well, Vicki is old news and they wanted to make every casting choice tie in to current shows.

Another, however, is that Vicki made this happen herself.

In Season 14, Vicki was only a “Friend” of the Housewives, but she was repeatedly accused of homophobia by viewers.

It makes sense. Her reaction to Braunwyn and Tamra’s makeout was not normal. She was also super weird about seeing a drag show.

When a gleeful monster like Kelly Dodd looks more open-minded and progressive than you are, it may be time to throw in the towel.