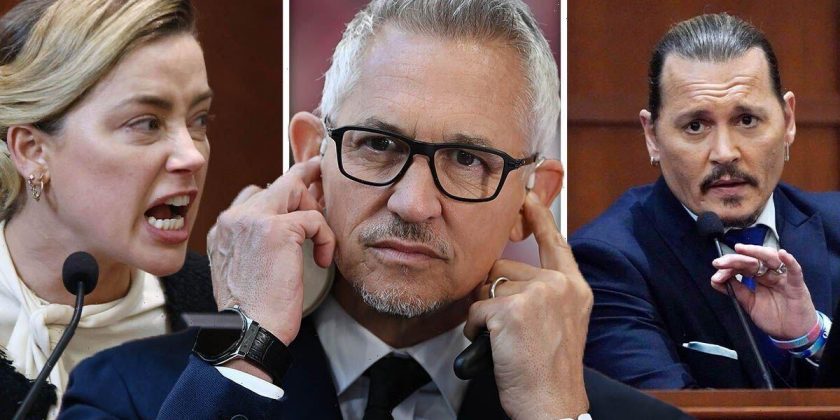 Depp wins and gets Heard immunity.

In view of his 8.4 million followers, he jibed: “Depp wins and gets Heard immunity.”

Many social media users rushed to the comments to slam the presenter for making a joke on a trial centered around allegations of domestic abuse.

ChayQuinn said: “It’s a domestic violence trial, Gary. This is in poor taste.”

Daviddotrobbo commented: “Domestic abuse is not a thing to be joking about.”

Mrsparkles3583 wrote: “Pull this tweet NOW, Gary. It may have been the right verdict but this is deeply offensive. Pull it.”

TheRealMrSweary added: “How hilarious you are. UNFOLLOWED!”

In context, Johnny won his defamation lawsuit against ex-wife Amber Heard, the jury has decided.

Johnny has been awarded $10million in compensation, and $5million in punitive damages, after the jury deliberated for three days.

Amber, who will have a chance to appeal the verdict, won $2million back in compensatory damages after winning one of her claims in the countersuit, but $0 in punitive damages.

Johnny was suing Amber over a 2018 article in the Washington post, in which she claimed to have become a figure representing domestic abuse, after filing a restraining order against the Pirates of the Caribbean actor.

She didn’t name Johnny, but he says he was the implied abuser and that it cost him acting jobs including his famous role of Captain Jack Sparrow.

Following the verdict, a statement from Amber’s representatives read: “The disappointment I feel today is beyond words.

“I’m heartbroken that the mountain of evidence still was not enough to stand up to the disproportionate power, influence, and sway of my ex-husband.

“I’m even more disappointed with what this verdict means for other women. It is a setback.

“It sets back the clock to a time when a woman who spoke up and spoke out could be publicly shamed and humiliated. It sets back the idea that violence against women is to be taken seriously.

“I believe Johnny’s attorneys succeeded in getting the jury to overlook the key issue of Freedom of Speech and ignore evidence that was so conclusive that we won in the UK.”

She concluded: “I’m sad I lost this case. But I am sadder still that I seem to have lost a right I thought I had as an American – to speak freely and openly.”

Johnny was not in court today, as he has been in the UK with Jeff Beck on tour, with ex-girlfriend Kate Moss joining him for last night’s performance.

Minutes before photos emerged on Twitter of Johnny in Newcastle.

Amber looked tearful and hugged her lawyer Elaine Bredehoft as the court case ended, while Johnny’s lawyers all hugged one another in celebration.