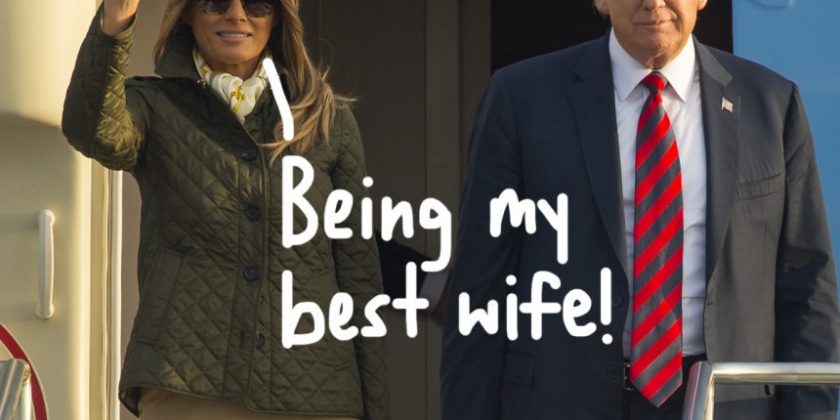 By now, many of us view Melania Trump as a helpless Slovenian princess locked in a castle against her will after making a bad deal with a bridge troll.

But according to a new memoir from a former White House staffer, the elusive First Lady is far from Donald Trump’s prisoner. Apparently, she’s his biggest cheerleader!

In his freshly-released memoir, Team of Vipers, ex-staffer Cliff Sims paints a much different image of FLOTUS than what most have envisioned: the former model who avoids her husband, slaps his hands away, and forces a pained smile when he looks at her.

On the contrary, Sims, who worked on Trump’s campaign and was a special assistant to Trump until 2018, describes Mel as the president’s “fiercest protector.” He writes:

“I know there are many outside the White House who have become invested in the mythology, often backed by anonymous sources, that Melania secretly hated her husband, or was planning to divorce him, or had some business arrangements that kept them together… As with every marriage, they had their good days and bad days, often centering around times when accusations of past infidelity were in the news. But from what I saw she never wavered in her support, and she was serious about her official role as first lady and her self-appointed role as her husband’s fiercest protector.”

While Sims has no problem blasting the president and the carnival that is his White House in the memoir, he makes a point to fully defend FLOTUS.

When Mel wasn’t spending “hours each day” tracking news stories surrounding the White House or defending her husband, Sims writes, she was working on perfecting her English for interviews or obsessing “over every detail of White House social events.”

In contrast to other memoirs, like Michael Wolff’s book Fire and Fury, that claimed the mother-of-one was in joyless “tears” after her husband won on election night, Sims claims Melania was actually super supportive.

“The man who is never at a loss for words was rendered speechless by the verdict of history. And he looked, just for the briefest of moments, vulnerable… Sensing this was Melania Trump. Melania was never the person outside observers seemed convinced that she was — a reluctant and put-upon spouse who just wanted to escape him. For good or ill, she was in it with him all the way.”

Sims remembered that the first lady then squeezed the president-elect’s hand, adding that she told him:

Despite this being perhaps the most flattering portrait of his wife, Trump dismissed the claims made in Team of Vipers following its publication. He wrote on Tuesday:

“A low-level staffer that I hardly knew named Cliff Sims wrote yet another boring book based on made up stories and fiction. He pretended to be an insider when in fact he was nothing more than a gofer. He signed a non-disclosure agreement. He is a mess!”

Well, there you have it: supportive Melania is just a work of fiction.