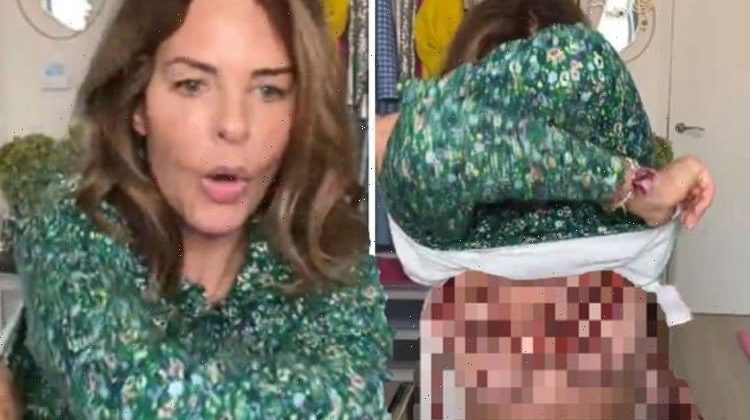 Trinny Woodall is well known for offering fashion tips on ITV’s This Morning after she found fame on the show What Not To Wear. She’s also active on social media where she often interacts with her 983,000 followers. However, some followers were left shocked when she suffered a wardrobe malfunction when appearing on Instagram Live yesterday.

The stylist was doing a try-on of new clothes which she had bought on a whim.

However, when taking one of the tops off, her bra popped open.

At first, Trinny didn’t realise what had happened.

“Look what happened I was just about to flash you.”

The star then went off-camera as she adjusted the bra before returning to film.

She changed into a new top as she told fans she didn’t want to flash them.

One fan noticed what had happened, posting to the editing team to alert them.

However, Trinny shared how she wasn’t bothered as she replied to the user.

The user then came back admitting they just wanted to let her know what had happened.

“I just saw the shock on your face when you thought you had flashed and thought you might prefer that section removed.

“If you’re comfortable with it, that’s all that matters.”

Other fans also weighed in over the gaffe posting below the image.

User helen_colosimo added: “I think this qualifies as a legit ‘wardrobe malfuction.’”(sic)

“Wasn’t expecting this video to be R-rated,” posted spaldrach1.

The video had seen Trinny trying on various clothes she had bought from Zara and H&M.

Her post was captioned: “I made some really bad decisions when I did some midnight shopping

“Which I’m going to share with you now ladies because I need your advice on what to keep and what to return so please may your comments be brutally honest big kiss have a lovely Sunday.”