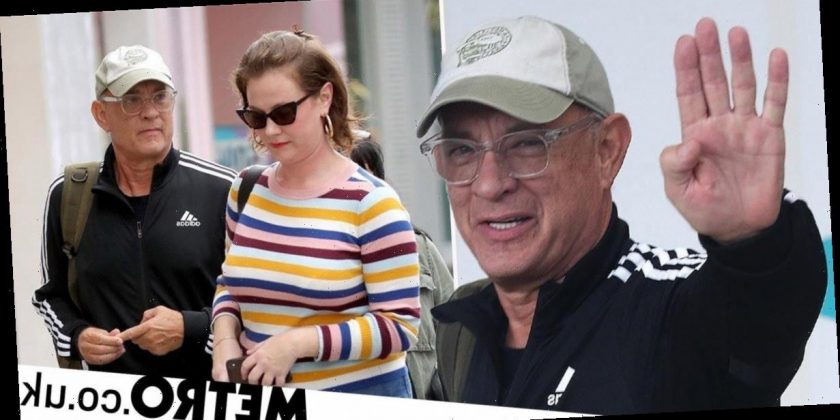 Tom Hanks was all smiles as his quarantine in Australia came to an end.

The Forrest Gump actor, 64, made headlines around the world earlier this year after he contracted coronavirus, alongside wife Rita Wilson.

After revealing their horrific Covid-19 symptoms, the couple recovered – with Tom returning to Aus earlier this month to continue filming for Baz Lurhmann’s upcoming biopic on Elvis Presley.

And the star looked upbeat as he stepped out for a spot of shopping in Queensland, after completing 14 days of self-isolation Down Under.

Upbeat as ever, Tom grinned widely and waved for fans at Pacific Fair Shopping Centre, in Broadbeach.

He opted for the causal look for the outing, rocking a black Adidas two-piece tracksuit, which he paired with fashionable black trainers.

The Oscar winner completed the look with a white and beige baseball cap, and a khaki bag slung over his shoulder.

Tom recently opened up about his battle with coronavirus, explaining that wife Rita suffered from different symptoms.

Speaking to Stephen Colbert on The Late Show, Hanks said via video call: ‘We had very different symptoms. She had a higher fever than I did, she had horrible nausea.’

He also revealed that Rita suffered from bad headaches and briefly lost her sense of taste and smell thanks to the illness.

‘I had bones that felt like they were made out of soda crackers,’ he continued. ‘Every time I moved around, it felt like something was cracking inside me.

As well as this, Tom had ‘bone crushing fatigue’ and that when he tried to do stretches in the hospital, he ‘almost passed out down on the floor’.

It took the couple around nine days to recover from Covid-19, and they have since donated their plasma to medical experts in the hopes that it can help those with severe coronavirus symptoms.