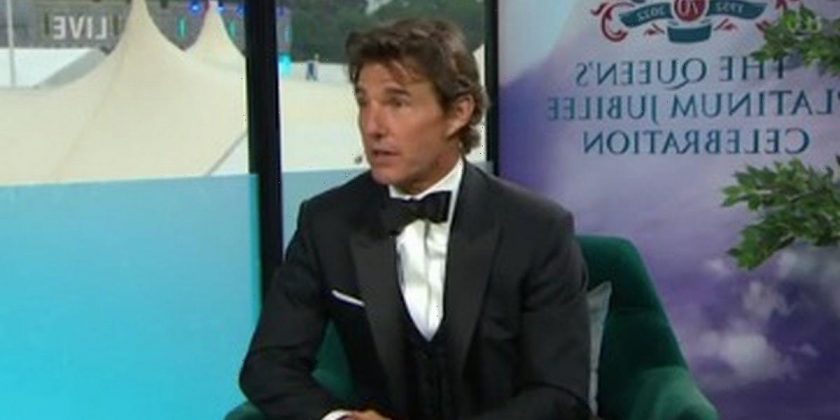 Actor Tom Cruise caused a stir when star-struck fans spotted the Hollywood actor, 59, arriving at the Queen's Jubilee Celebrations on Sunday (May 15).

However that excitement from fans quickly turned sour as the Top Gun actor was later slammed after his interview with Phillip Schofield and Julie Etchingham.

Tom was invited to the one-off Royal event to introduce the Kings Trop Royal Artillery and while he made gushing comments about Her Majesty, viewers were less than impressed with his overall interview.

During the celebratory evening, Tom, thought to be worth an impressive £490.2million, spoke with Phillip Schofield and Julie Etchingham at great length about his latest film.

Speaking of the Queen, the star did say: "It is a real privilege. This is a woman who I greatly admire. She has tremendous dignity and what she has accomplished is historic.

"I just have great respect for her. I really love the tradition. And what a moment. That's a lot of history there."

He added: "Presidents, world leaders, people of all walks of life, not just in America but the world, knows dignity and devotion and kindness – something I’ve always felt about her."

Yet the emphasis did very much remain on his film, leaving viewers to vent their fury on Twitter.

But one baffled viewer penned: "The #ITV #platinumjubilee celebration programme is very strange. I had no idea it was even on. Why isn't it being broadcast during the jubilee long weekend? Why has Tom Cruise just promoted his new film? It seems to be just clips of random celebs. I'm very confused."

"Could not understand why Tom Cruise was part of this #Jubilee program," another wrote. "Now I know. He has a movie to plug. I mean that whole interview was very little to do with The Queen. Surprised he didn’t break out the Scientology pamphlets."

A third said: "Have I missed something? Why is #TomCruise hosting the Queen's Platinum Jubilee Celebration? And why does he look like Hugh Grant now? And does the Queen look suspiciously different? It's all a bit bizarre. #queensplatinumjubilee."

The original Top Gun was released in 1986 and its sequel Top Gun: Maverick was supposed to arrive on July 12, 2019.

However, the pandemic along with scheduling conflicts caused the film to be pushed back to 2022.

The Hollywood legend told Phillip, 60, and Julie, 52: "Every film I make is important, but this one, people have been asking for decades. For decades I’ve been thinking "what could I do?"

He shared that the new film was done "for the fans" and completing it was "emotional".