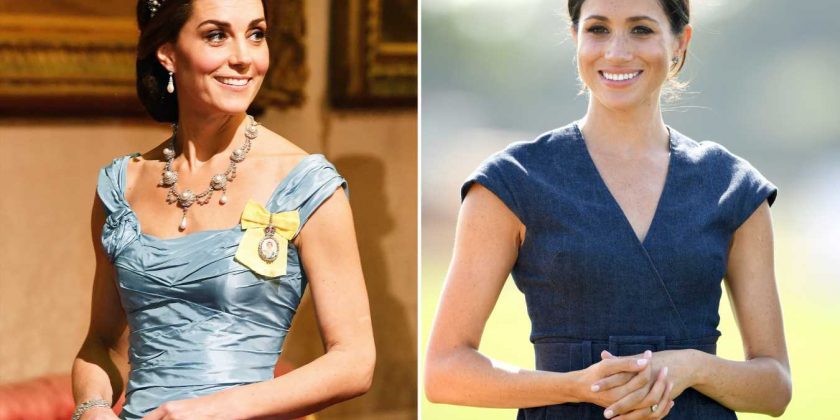 Time to dust off the royal tiaras!

Kate Middleton has only been seen in a tiara a handful of times, and on June 3, she’ll wear a sparkly topper once again for a State Banquet at Buckingham Palace for Donald Trump’s official State Visit to the U.K.

The Queen will host a private lunch earlier in the day for the President and First Lady. Afterwards, Trump and his wife Melania will join Prince Charles and Camilla, Duchess of Cornwall for tea at their nearby residence, Clarence House.

Prince Harry is said to be joining the royals for the private lunch without wife Meghan Markle, who is currently on maternity leave after giving birth to their son Archie on May 6. Neither the Duke or Duchess of Sussex will be at the State Banquet later that evening. However, both Kate and Prince William will be in attendance.

Kate was last seen in a tiara for the Queen’s State Banquet in October for King Willem-Alexander and Queen Maxima of the Netherlands.

She arrived to the palace wearing the Lover’s Knot tiara. Sometimes referred to as the Cambridge Lover’s Knot, it is one of the best-known tiaras in the British royal family’s collection, mostly thanks to it being a favorite of the late Princess Diana. Her classic updo showed off her pearl drop earrings, which also belonged to Diana.

RELATED: Every Time Kate Middleton Has Worn a Tiara – See the Photos!

William and Kate, who attended her first state banquet alongside the Queen in 2015 when Chinese President Xi Jinping came to London, are becoming regular fixtures on the list of royals welcoming heads of state as William is second in line to the throne.

Meghan has yet to be seen in a tiara since her wedding day on May 19, 2018. But she has worn several treasured pieces of jewelry that once belonged to Harry’s late mother, Princess Diana. She has also worn jewelry given to her by the Queen.

While Prince Harry isn’t taking paternity leave – he has made several appearances since welcoming son Archie, including a short trip to the Netherlands and Rome – Meghan is adjusting to life as a new mother at home. Aside from the family’s first outing as a trio, a small press pool at Windsor Castle’s grand St. George’s Hall, the Duchess of Sussex has stayed out of the public eye.

However, it likely won’t be long until royal fans see the first-time mom again. One year after making her debut on the famous Buckingham Palace balcony for Trooping the Colour celebrations, it’s expected that Meghan will once again join the royal family for the festivities. The annual event, held in honor of Queen Elizabeth‘s birthday, takes place on Saturday, June 8.