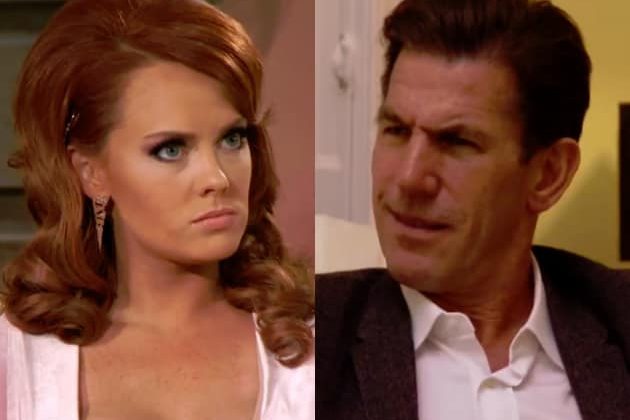 The disgraced former Southern Charm star and accused rapist has even more allegations to hurl at his ex.

In their heated custody battle, Thomas says that Kathryn is too mentally ill to have full custody.

As we previously reported, Thomas Ravenel made some damning accusations against his baby mama.

The Ashley pulled together some further details and noted that he accuses Kathryn Dennis of being mentally ill.

“Plaintiff has been diagnosed with multiple mental health conditions,” his court documents accuse.

“Self-mutilation,” the accusations go on. “And cluster B personality traits, including histrionic borderline personality disorders.”

We’ll talk about what all of these mean in a moment.

Thomas has even more accusations to level at Kathryn, the woman whom he was just publicly defending a few months ago.

For one thing, he and his team accuse Kethryn of having never actually completed rehab and treatment in 2017.

Thomas then accuses Kathryn of having “a history of purchasing synthetic urine for the purposes of passing drug tests.”

That is a hell of a claim to make.

And what he’s saying, in essence, is that all of those times that Kathryn has tested negative for drugs don’t actually count.

As we previously reported, the documents that Thomas filed say that Kensie has suffered because of who Kathryn is.

Thomas claims that their daughter has “developmental and behavioral issues.”

These are allegedly the result of Kensie’s “lack of bonding” as an infant with Kathryn.

Even more seriously, Thomas alleges that Kathryn drank and did drugs while pregnant with their son, Saint.

Kathryn lost custody of both children in 2016 after she tested positive for (gasp) marijuana.

Remember, even though it’s legal for tens of millions of Americans and some say it makes them better parents, that is not yet the case in South Carolina.

During the first half of 2018, Kathryn revealed that she and Thomas now share a 50/50 split of custody — and Kathryn is seeking osle custody.

That is why Thomas is fighting back so aggressively.

He even claims that Kathryn continues to buy drugs from “friends, cast members and show producers to support her prescription drug habit.”

There’s a veiled threat — that he might drag her friends and castmates into court to testify about any alleged drug use.

Or that Kathryn might be forced to do so in order to disprove Thomas’ allegations.

Thomas’ arguments cite an alleged incident from October in which Kathryn was, they say, irresponsible.

In October, Kathryn was spotted appearing to back her jeep into a parked BMW SUV.

It did not look like Kathryn left the vehicle to inspect for any damage before driving away.

That’s … not great, but Thomas’ team argues that it’s part of a larger pattern.

In court documents, Thomas argues that it just goes to show Kathryn’s “gross lack of character and integrity.”

And, Thomas argues, the incident casts doubt on Kathryn’s “ability to be a moral example and role model for the minor children.”

Bipolar disorder can be a serious and life-impacting mental illness, but with medication, people can go on to live normal lives.

OCD and ADD are both fairly normal conditions that are part of people’s lives but very rarely prevent them from living those lives.

Kleptomania and self-harm can be serious, but are usually treatable with therapy.

We cannot speak to her having borderline personality disorder. Plenty of perfectly nice people have it and live normal lives.

People who go to therapy to seek help with their issues are more likely to receive a diagnosis.

Regardless of what you think of Kathryn, this appears that Kathryn’s responsible quest for help is being used against her in court.

Southern Charm Season 6: Everything We Know About the Return of Reality TV’s Most Scandalous Show!