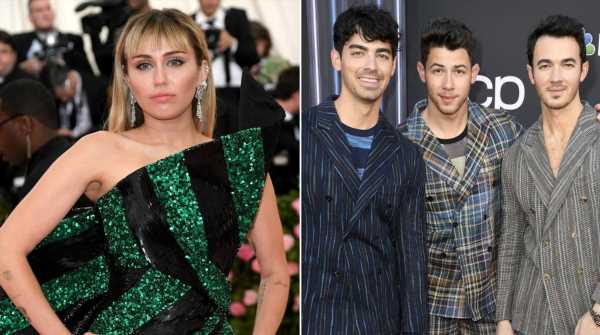 Miley Cyrus is continuing to push everyone’s nostalgia buttons with blasts from the past. In addition to flooding social media with throwbacks to her Disney Channel days the past couple of months, Cyrus is also prompting other stars to think way back. And she did just that to the Jonas Brothers when they paid a recent visit to Capital FM. The Jonas Brothers appeared on Capital FM to promote their new album on Wednesday, May 29 and they got quite the surprise during their interview. Turns out, Cyrus pre-recorded a question for the brothers that caught them off guard. The video of Miley Cyrus asking the Jonas Brothers about their purity rings will make you smile.

Cyrus, who formerly dated Nick Jonas, appeared on Capital FM and was asked to pose a question for the Jonas Brothers. In true Cyrus fashion, she asked a zinger of a question that essentially rendered the Jonas Brothers speechless. As previously mentioned, Cyrus asked the brothers about the purity rings they wore at the beginning of their careers to signify their intention to stay virgins until marriage.

In any case, Cyrus decided to bring up the purity rings during her time on Capital FM.

When the brothers saw the video, they seemed momentarily stunned, but they ultimately answered.

You can watch the Jonas Brothers responding to Miley Cyrus’ question down below:

"I’m not being snarky when I ask this, I’m seriously curious," the fan asked on Reddit. "Was the whole purity ring thing a part of your marketing to families and young kids? Or were you seriously about abstaining from gettin’ down and it was just publicized to give you guys a cleaner image?"

Nick had the perfect response and explained the whole thought process behind the brothers’ purity rings.

"I’d like to start by saying this: I came from an incredibly religious home," Nick said in his response to the fan. "Growing up, my dad was a pastor, and much like The First Family or people in front of the public eye, we were highly scrutinized as a family within the church and looked at as, well I guess you would call an example of what that family image should be. So long before our career started in music, that was what we were dealing with."

But that wasn’t all Nick said. He even went on to explain that the purity rings were not the Jonas Brothers’ idea. It actually came from someone else.

"There was a person in the church who at one point demanded that all the kids in the youth group put these purity rings on and make this commitment," he explained.

So, the rings were basically thrust upon them without them fully realizing what it all meant. At least the brothers have figured things out for themselves, though!