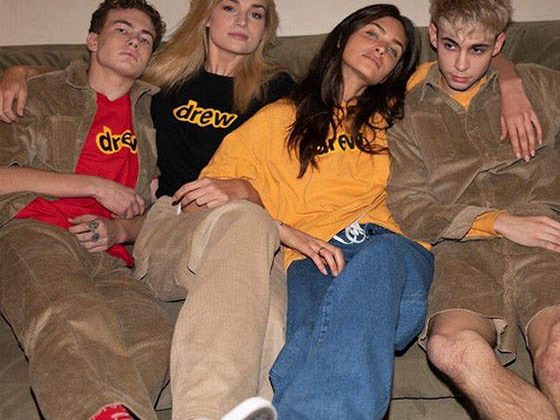 When I saw those cheap dollar store slippers Justin Bieber teased his fans with last month, I knew his upcoming clothing line was going to be a visual piece of art that would invoke class and sophistication. And, sarcasm. I knew his clothing line was going to keep my eyes on a continuous loop of rolling because I expected it to be horrible and it actually turned out worse.

Justin’s new clothing line, Drew House, is supposed to be for people who don’t care about how they look, and it shows. Because in the pic from Drew House’s Instagram page most of his pieces look like they were constructed from dusty thrift store couches.

Everyone in this ad looks like starving latchkey kids who locked themselves out of their houses, except the sistah on the left who’s looking into the camera like ,”Y’all know this is some bullshit, right?”

What’s the deal with all of this beige? Is that the color of choice among the Meh Crowd? Because this entire line is the definition of “You’re trying too hard at not trying hard enough“. The Daily Beast reports that Drew House is officially open for business. But if you were hoping to run over there and spend your hard earned money on a pair of $148.00 corduroys or a basic bitch beige button-down (also $148.00), you’re too late. Everything is sold out. And my question is Why? The majority of Drew House’s line looks like high school musical prison uniforms and all of the models look so unaffected. Maybe this apathetic representation is because Justin, who’s in his 20s, wants his clothing to be a throwback to the 1990s when nobody cared how you looked. Young man, back in the 90s EVERYONE cared how they looked. You’re not necessarily re-inventing the wheel here. And I’m not the only person who believes Justin is out of his damn mind with these prices for boring clothes. You know Twitter had a field day with this shit.