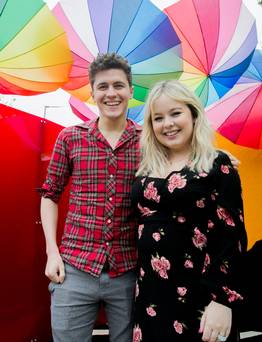 Derry Girls star Nicola Coughlan put the controversy around a British tabloid criticising her dress well and truly to bed as she said: “They want to reduce women” to what they wear.

Coughlan (32), who plays Claire in the Channel 4 comedy hit, became the subject of negative press last month at the Baftas when a publication said her pale pink bodycon dress was “not the most flattering”.

Coughlan told the Herald: “It’s always the way. They want to reduce women to ‘Oh you look like this in a dress’ and you’re like ‘No, no, I’ve worked so hard and have been acting since I was 14 years old, professionally’. “And this show has been nominated for the best comedy, this is the best of the best and all you want to do is talk about my dress. I look good in my dress – whatever.”

The actress said the comment was “so stupid – I felt so happy in my dress”.

Though Nicola said the cast would have liked to have won a Bafta, just being part of the show makes the actors “feel like winners all the time”.

“From literally the first episode people have been behind us all the way, so you can’t feel bad,” she said.

Coughlan, who appeared at the Bloom festival launch at Phoenix Park, Dublin, along with James from the show (Dylan Llewellyn), said she’s set to appear in a new drama but she remained tight-lipped about the project, stating: “It’s secret, it’s not in Ireland.”

“It’s amazing to have Derry Girls and to know that we’re coming back to it.

The actress said although comedian Tommy Tiernan, who plays Gerry in the show, recently said there would be a movie of Derry Girls, she didn’t think it was “a thing”.

“I know we’d all love to do it and it would be great, so much fun, so whatever Lisa (McGee, the show’s writer) wants to do, we totally trust her.”

And the Galwegian also revealed she and the cast had met the “real Derry girls”, the women Ms McGee had grown up with.

“I’ve met all the real Derry girls which is such a mad experience,” she said.

“The real-life Claire, I was so nervous to meet her and it’s weird because in this job you meet a lot of famous people but that was way more intimidating, to meet her.”

It seems the actress may already have found the downside of fame, as although most people are “really nice, I was walking round Galway the other day and someone chased my car – I was like, this is mental”.