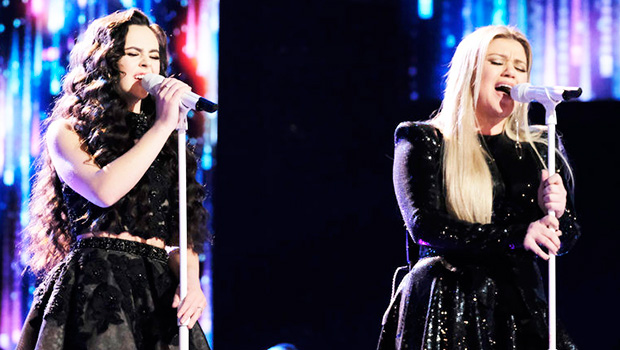 Chevel Shepherd is one step closer to winning ‘The Voice,’ and she has learned so much from Kelly Clarkson. Chevel talked EXCLUSIVELY about being mentored by Kelly, what she’ll do if she wins, and more!

“She has taught me so much along this journey,” Chevel Shepherd gushed to HollywoodLife EXCLUSIVELY about her coach, Kelly Clarkson. “I know I want to keep working with her. She is so easy to be around. I love to learn, so anything she wants to give to me I am open to.” Chevel is one of the youngest finalists at just 16 years old. Kelly knows a thing or two about how to mentor young rising talent. In her first season of coaching, Kelly won with 15-year-old Brynn Cartelli.

Chevel revealed that she’s actually gotten to talk with Brynn about The Voice, thanks to Kelly. “I got to hang out with her at the showcase that Kelly took us all to, and it was really cool to listen to her experience being on the show before all of us,” Chevel said.

Chevel is up against Kennedy Holmes, Kirk Jay, and Chris Kroeze for the season 15 championship. Chevel knows that if she wins, she’s likely going to need some tissues! “I might cry. I am a pretty emotional person,” Chevel told HollywoodLife. “I am just going to be super, super grateful and super thankful to everyone who voted me through. So if I win tomorrow, it is going to be super exciting. But no matter what happens I am still going to be happy!”

The 16-year-old singer from New Mexico will be hitting the stage with Dan + Shay for a performance during the second night of the finale. “They are awesome, so I am really, really excited for everyone to see it,” Chevel teased. The season 15 champion will be crowned during the two-hour finale event on Dec. 18 at 9 p.m. on NBC.