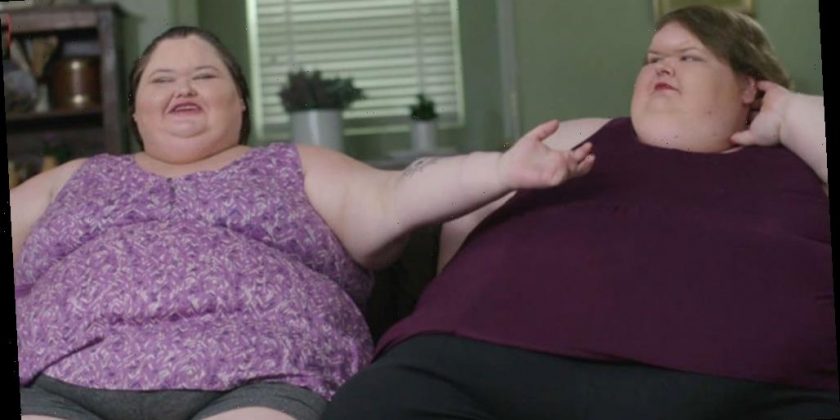 TLC’s 1000-Lb Sisters focuses on Kentucky siblings Amy and Tammy Slaton. As the title of the show suggests, the sisters featured on the series have a combined weight that exceeds 1,000 pounds.

The series, according to TLC’s announcement, focuses on 406-lb Amy, “who wants to start a family with her new husband but is having trouble getting pregnant due to her weight and health issues,” and her 605-lb sister Tammy who “needs help with everyday tasks” and had to move in with her sister and brother-in-law after a stint in the hospital. TLC’s 1000-Lb Sisters follows the two siblings in their attempt to lose enough weight to qualify for bariatric surgery. “I think it’s going to be hard because we’ll both be grumpy if we don’t eat,” Amy pointed out in a promo.

From their hidden personal struggles to their unexpected fame on YouTube to the launch of their new series, read on to learn the untold truth of TLC’s 1000-Lb Sisters.

In 2011, Amy Slaton launched her own YouTube channel, posting lighthearted videos featuring her and sister Tammy. It wasn’t until 2014, however, that they skyrocketed to online fame by taking on the “Chubby Bunny Challenge.” The goal of said challenge is to stuff marshmallows into one’s mouth, one at a time, and utter the phrase “chubby bunny,” which is ridiculously difficult to enunciate with a mouth packed with marshmallows.

In their video, the stars of TLC’s 1000-Lb Sisters crammed marshmallow after marshmallow into their mouths, cracking each other up as they do so. Despite its silliness — or probably because of it — the video quickly went viral, racking up more than 1.8 million views. (Note: While the Chubby Bunny challenge can be funny, it’s also one of the most dangerous food challenges ever.)

The video’s unexpected success made the sisters YouTube sensations, and more videos followed, with some gaining big viewership. In April 2016, Amy Slaton had her most-watched video ever (at the time of this writing) with “The Power of Makeup,” in which she puts makeup on half her face and leaves the other half untouched to offer a sort of compare and contrast. That video received an astounding 7.3 million views, proving the Slatons were no one-hit wonders on the video platform.

The stars of TLC's 1000-Lb Sisters have faced bullying online

The double-edged sword of YouTube stardom is that the factors that make someone popular are usually the same things they’re criticized for. The Slatons were not immune to this phenomenon, and they were hit with a barrage of cruel and hateful comments. In fact, in 2017, Amy Slaton posted a video of herself reading some of the “hate comments” the sisters have received, and then she responded to them directly.

Not only do the Slatons occasionally respond to the haters, but sometimes their fans do it for them. In May 2017, Amy Slaton took to Instagram to repost a message from one of her social media followers who wrote, “This post goes out to Amy Slaton other ladies being bullied on social media. Stop it! Yes, you trolls and spiteful haters. … If you don’t like Amy Slaton then don’t watch her channel. Spreading hate and negativity will destroy you [from] within.”

In the caption of her repost, TLC’s 1000-Lb Sisters star wrote, “Y’all are so nice to me, this is just one example of a fan being so kind and supportive. Without y’all Idk where I’d be.”

Given that Tammy Slaton weighs more than 600 pounds, it’s not surprising that she’s experienced some severe health challenges. “Tammy’s limited mobility forces her to rely on Amy more than she’d like to, adding to the tension that already exists just from living under the same roof,” the announcement for TLC’s 1000-Lb Sisters noted. “She hasn’t left home in six years except for medical attention, and the isolation has taken a toll on both of them.”

In an interview with the Louisville Courier Journal, Tammy explained that her motivation to have bariatric surgery and to document her weight-loss journey for TLC was to simply become healthy. She shared that she’s coped with two blood clots, pneumonia, and several medical procedures. She was even being placed on life support in the past. “I’m tired of being sick all the time,” she admitted. “I’m just done.”

In March 2019, Tammy shared a video of herself in a hospital bed after being admitted for yet another malady. Explaining she was hospitalized after her foot had become so painful and swollen she couldn’t stand up, she revealed her latest affliction: “I got gout.”

Chromic health issues not only affected Tammy Slaton’s mobility and kept her more-or-less housebound for years, but also left the star of TLC’s 1000-Lb Sisters suffering with severe depression. The isolation she felt, she told People, eventually became so overwhelming that it actually brought her to the brink of taking her own life. “I attempted to kill myself last January,” she candidly told the magazine in December 2019.

Ultimately, the experience served as a wake-up call, convincing her it was time to make some big adjustments in her life — in order to ensure she would still have a life in a few years. “I had a feeling that if I didn’t make changes now, I wasn’t going to live past 35,” she admitted.

With 1000-Lb Sisters chronicling the siblings’ attempts to embrace healthier dietary choices and begin an exercise regime, Tammy told People that the results have been encouraging. “I don’t feel like I have to wear a mask or hide my body when I leave the house anymore,” she declared. “I’m not afraid to let people see me.”

Star of TLC's 1000-Lb Sisters, Amy was of average weight until this happened

Amy Slaton turned to food as a means of coping with grief, and it’s something the star of TLC’s 1000-Lb Sisters has been battling for most of her life. Speaking with the Louisville Courier Journal, the Slaton sister said her weight was basically average until approximately age 10, when her beloved grandmother passed away. “My mom worked two to three jobs at a time, and my grandma was basically our mom,” she explained. “When she died, our whole world changed.”

With their mother working and their older siblings having moved out of the family home, the death of their grandmother forced Tammy and Amy to fend for themselves. Aged 10 and 11 at the time, they turned to easy-to-prepare packaged food such as frozen pizza and ramen noodles. “It’s what we ate to survive, and that stuff is not good for you,” Tammy told the newspaper. “Depression and just trying to live all kind of caught up with us.”

While they’re now more knowledgeable about nutrition, Amy lamented the fact that healthier food options are often the most expensive. “You go to McDonald’s and you can get a cheeseburger for a dollar, but a salad costs like five,” she complained.

In early December 2019, TLC announced it would be airing the six-episode docu-series 1000-Lb Sisters, and the network — which is known for premiering shows like The Little Couple, 90 Day Fiancé, and Welcome to Plathville – unveiled the first promo video for the show.

People who viewed the trailer were quick to share their reactions on Twitter, and responses were all over the map. While there were people who mocked the show, there were also those who were appalled by the sisters’ dietary choices. Admitting she felt “grossed out” watching the preview, one Twitter user wrote that she was “not trying to judge these women, but when you’re in that position WHY would you make Lasagna, Chicken and Dumplings, two Desserts and a Peanut Butter and Mayo sandwich for dinner?” Another tweet read, “This is just depressing. How in the world could…I mean it’s just really sad.”

However, after a sneak peek of the premiere of TLC’s 1000-Lb sisters streamed online ahead of its air date, there were others who clearly felt like they’d found their next favorite reality show. “I was really trying not to get locked into another reality series in 2020 but this 1000-Lb Sisters from @TLC already has me hooked,” wrote a fan. “The #1000lbsisters was actually…good? I’m surprised i liked it!” wrote another.

Prior to the launch of TLC’s 1000-Lb Sisters, the network posted a video on Facebook showing the Slaton sisters undertaking the “Dressed Banana” challenge. In the video, Tammy asked, “What the heck’s a Dressed Banana?” As Amy explained, the process involves peeling a banana, dipping it in a jar of salad dressing, and then rolling it in crushed peanuts, a concoction she admitted sounded “like the nastiest thing in the world.”

Interspersed with the duo’s banana-dipping exploits, the sisters are also seen sitting on the porch offering some commentary behind the silliness. “When people see us eating the banana, the comments … are gonna be tellin’ us we don’t need to be eatin’ it,” said Tammy. “We’re getting so used to it now,” added Amy. “It’s more like, ‘Oh, another comment.’ If you eat something and somebody tells you not to, you’re going to eat it even more. So basically, this is like, eat it.” Tammy noted, “Live a little.”

Finally, the sisters took a taste of their culinary creations. “Slimy yet satisfying,” quipped Tammy. The video ended in pure slapstick Slaton style, with the sisters smashing cream pies in each other’s face. Guess that’s one way to promote a show.

Speaking with the Louisville Courier Journal, the Slatons revealed that it was their YouTube followers who first reached out to TLC, imploring the network to feature the sisters in a TV docu-series. Ahead of TLC’s 1000-Lb Sisters’ debut, the sisters expressed their hope to be able to show people a different side of themselves that doesn’t necessarily come across in their wacky YouTube videos.

“Doing the show is one way to give us a different light because you can only show so much on YouTube,” Amy explained. “This is actually day-to-day stuff that we deal with.” One of those “day-to-day” things is Amy’s desire to have a baby with her husband, Michael. However, her obesity has become an obstacle in becoming pregnant, with doctors warning her she won’t be able to conceive until she loses weight.

“I alway wanted to be a mom. I feel incomplete as a woman because I can’t have a kid,” Amy revealed in the debut episode of 1000-Lb Sisters (via Heavy). “My husband Michael means the world to me.” She also added, “He’s really supportive of helping Tammy.”

According to People, the Slaton sisters filmed the first season of TLC’s 1000-Lb Sisters in May 2019. And in their late December 2019 interview with the magazine, Tammy and Amy Slaton hinted that they’ve been taking their goal to become healthier seriously.

In addition to removing sugar from their diets, they’ve reportedly embraced “low-carb, high-protein” foods. Each has also settled on a favorite form of exercise. Tammy revealed she enjoys swimming, while Amy noted that she started dancing and going for long walks with her husband.

After their experience on the show, both sisters said their self-esteem has grown by leaps and bounds. “I can go to the store and not worry about my looks because I feel good about myself regardless of what other people say about me,” said Amy. “I’m beautiful the way I am.”