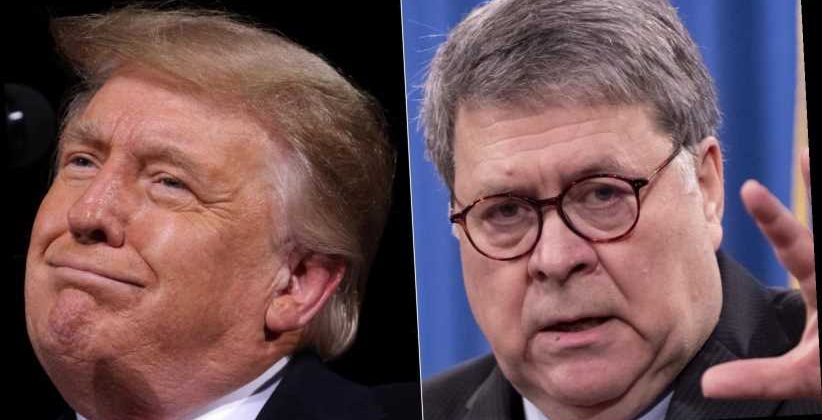 Words cannot fully describe what occurred on Jan. 6, 2021, but it was a disappointing day for Americans to say the least. Thousands of supporters of former President Donald Trump stormed the Capitol Building while Congress sat in to confirm Joe Biden for President of the United States.

Trump’s followers flooded the normally secure halls. According to the BBC, once the angry mobs — who entered destroyed multiples offices and American memorabilia — trashed the building, Trump tweeted for those in the building to “Stay Peaceful!” and respect the law.

While the uproar occurred and millions watched around the world, many celebrities and White House officials took to their social media platforms to share their thoughts on the chaotic and quite disturbing situation.

One of which was former Attorney General William “Bill” Barr, who has quite the history with the reality star-turned-president. Keep scrolling after the jump to hear what Barr had to say.

Many politicians and officials offered their opinions and officials statement regarding the events of Jan. 6, 2021, and former Attorney General William Barr is no exception. On Jan. 7, Barr shared his statement to the Associated Press, according to the New York Post, where he directly blamed former President Donald Trump for the violent mob.

“Orchestrating a mob to pressure Congress is inexcusable,” read the statement. “The President’s conduct yesterday was a betrayal of his office and supporters.”

For those who haven’t been paying attention, Barr resigned from his position as Attorney General on Dec. 24, 2020. Trump actually announced his resignation on — you guessed it — Twitter.

“Just had a very nice meeting with Attorney General Bill Barr at the White House,” he wrote, along with Barr’s official resignation letter. “Our relationship has been a very good one, he has done an outstanding job! As per letter, Bill will be leaving just before Christmas to spend the holidays with his family.”

If former Attorney General Bill Barr and President Donald Trump’s relationship seems to be a confusing one, that’s because it is. Prior to Barr slamming Trump on Twitter over the Capitol riots on Jan. 6, 2021, the two often said good things about one another.

In fact, in his resignation letter, Barr had nothing but positive things to say about Trump.

“Your record is all the more historic because you accomplished it in the face of relentless, implacable resistance,” Barr wrote. “No tactic, no matter how abusive and deceitful, was out of bounds. The nadir of this campaign was the effort to cripple, if not oust, your administration with frenzied and baseless accusations of collusion with Russia.”

As noted above, Trump himself stated that Barr had done an “outstanding job!” as attorney general. He also once called Barr “fair and reasonable” in a 2019 tweet, congratulating Barr for “taking charge” of the February 2020 Mueller investigation.

But then things got messy…

Did Bill Barr leave on his own — or was he actually fired by Donald Trump?

So what really happened with Bill Barr’s resignation from his role as the U.S. Attorney General? Things seemed to turn sour when you look back to what happened prior to Barr leaving his position.

In one December 2020 tweet, Trump appeared to blame Barr, in part, for him losing the presidential election. “Why didn’t Bill Barr reveal the truth to the public, before the Election, about Hunter Biden.” (According to Politico, Biden was being investigated for “tax-related issues.”)

And according to CNN, sources close to the situation revealed that the President Donald Trump was “seriously considering firing his attorney general” only days before the resignation announcement, though officials close to Trump “did not believe he would go through with dismissing Barr immediately.”

Still, multiple officials noted that the meeting the two men had we completely “cordial.” One further explained: “He wasn’t asked to resign. It was an amicable meeting.”

Donald Trump changed his tune following the riots at the Capitol

Bill Barr’s words (and others’) may have reached Donald Trump in the end, as the president had a change of tune during his concession statement on Jan. 7, 2021.

In the video shared to Twitter, he said, “I would like to begin by addressing the heinous attack on the United States Capitol. Like all Americans I am outraged by the violence, lawlessness and mayhem. I immediately deployed the National Guard and federal law enforcement to secure the building and expel the intruders.”

He later noted, “Now, Congress has certified the results. A new administration will be inaugurated on January 20. My focus now turns to ensuring a smooth, orderly, and seamless transition of power.”

The lengthy speech ended on a positive note, with Trump calling for “healing and reconciliation.” Barr has yet to speak on the latest addition, but it’s possible he has a few words.