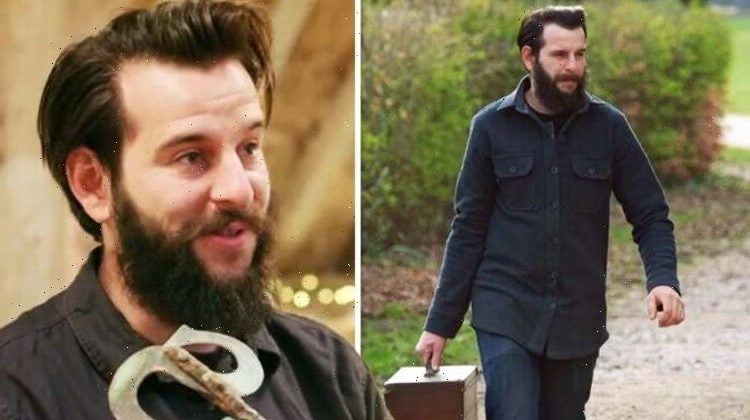 Dominic Chinea has become one of the most-loved stars of BBC One’s The Repair Shop since it began in 2017. The show sees Dominic and fellow experts including Jay Blades, Suzie Fletcher and Will Kirk restoring old heirlooms to their former glory.

Before his life on TV, Dominic’s speciality was graphic design and car restoration.

He also worked as a set designer on celebrity photoshoots and music videos for many years.

His CV includes building on a London rooftop for Lewis Hamilton, working on a perfume campaign for Cheryl in Los Angeles, and putting Miley Cyrus in a bath of milk for a music video.

As a fully equipped metalworker, Dominic initially wanted to turn down a major TV opportunity.

He explained in an exclusive interview with Express.co.uk: “If you had met me before The Repair Shop, I would be the last person you would have expected to be in front of the camera.

“Although I was very used to being on a film set, I was usually stood behind the set holding pieces together.

“When the opportunity came about, my initial reaction was to say, ‘no way, that’s not for me!’

“I am quite quiet usually, so having six million people watching me work and listening to what I am saying is quite daunting.”

After around six years on the show, Dominic says he is “slowly getting used to it.”

However, he admits that he “still gets nervous before every scene”, but that “it helps to have such a great supportive atmosphere on set”.

The craftsman also shared what he thinks about his fellow experts.

Dominic said that they “genuinely get on as well as it appears on telly” and that “everyone loves what they do”.

He also expressed his gratitude at being able to work with “such a talented group of people” and that he sees it as an “honour”.

Nevertheless, he admits that the barn can be a “challenging place at times”.

He said: “Hearing the emotional stories behind the items is not always easy. I feel a huge amount of pressure to do the right thing for the owners and for the objects themselves.”

It comes as Dominic will be appearing at this year’s Ideal Home Show in partnership with NatWest.

The metalworker said he is “so excited” to be attending the event for the first time.

On what guests can expect, Dom said: “I’ll be on stage talking about my love of salvage yards and upcycling, sharing my tips and tricks to make people feel more confident about giving things a go at home.”

The Ideal Home Show, in partnership with NatWest, the world’s longest-running home and interiors exhibition, returns to Olympia London from Friday 11th to Sunday 27th March 2022.

Dominic will be attending the show on Monday 21st March.

A host of experts and celebrities will be hosting Q&As on stage throughout the 17 days at the show. For more information and tickets, please visit idealhomeshow.co.uk.