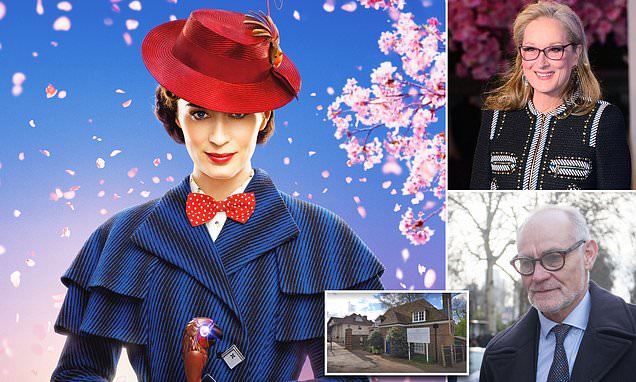 The practically perfect (and very posh) connections that sent Emily Blunt soaring: How Mary Poppins star went to school with the Jaggers, had an uncle in the Government and was mentored by Judi Dench and Meryl Streep

She’s the practically perfect star of Mary Poppins Returns, which opens in cinemas this weekend and has already earned her a Golden Globe nomination.

But what do you know about our latest Hollywood superstar?

As Alison Boshoff discovers, there is nothing ordinary about Emily Blunt… 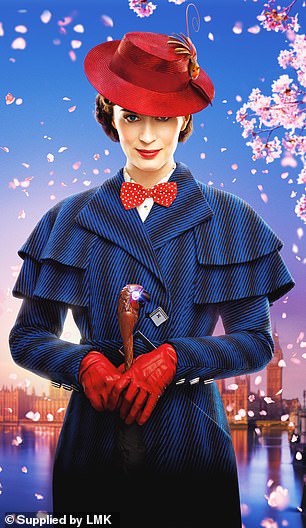 An Army boxing champion, he fought at Anzio in Italy in World War II, and won the George Medal for saving one of his drivers from almost certain death.

Her father is Oliver Blunt, a successful QC, and her mother Joanna teaches English, but was a successful actress before turning her back on showbusiness.

Under the name Joanna Mackie she appeared in the 1978 TV mini series Lillie (Francesca Annis played royal mistress Lillie Langtry) and went on to have roles in Grange Hill and The Bill.

Emily, 34, is the second of four children.

Her older sister Felicity trained as a barrister, but is now a literary agent who is married to American actor Stanley Tucci.

Her brother Sebastian is also an actor and sister Susannah is a vet.

The family lived in Roehampton, South-West London, and the children were sent to the nearby private school Ibstock Place — alongside Mick Jagger and Jerry Hall’s brood.

One of her father’s more high-profile cases was defending some of the Millennium Dome robbers.

… With a hint of scandal

Emily’s uncle Crispin Blunt is the MP for Reigate who announced in 2010 that he had separated from his wife of nearly 20 years ‘in order to come to terms with his homosexuality’. At the time he was the Prisons Minister.

A former Army officer, he had been an adviser to Tory bigwig Malcolm Rifkind on defence. 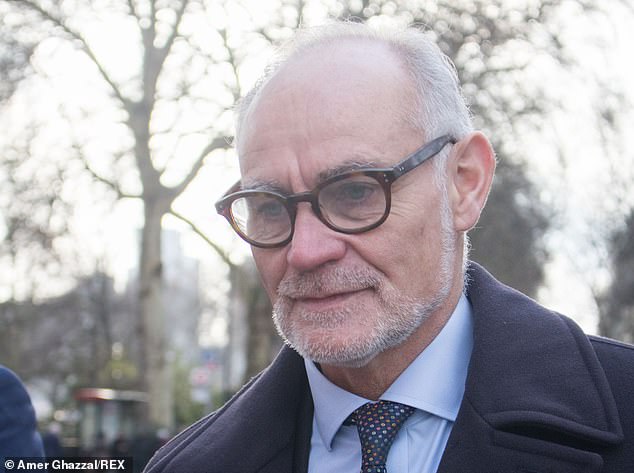 The actress is the niece of Crispin Blunt, the MP for Reigate, who announced in 2010 that he had separated from his wife ‘in order to come to terms with his homosexuality’

More recently he spoke out against a proposed ban on the legal high poppers, or alkyl nitrates, that are normally sniffed from a bottle.

He told the Commons: ‘I use poppers. I out myself as a user of poppers. I am astonished to find it [the Government] is proposing it to be banned and so would many other gay men.’

Emily tells the story of how, as a young girl, she met the Queen Mother at an event which she had been invited to with her illustrious grandfather.

She thrust her ‘practically decaying’ cuddly toy under the Queen Mum’s nose. The royal response was: ‘Oh yes. I see that he is very well loved.’

Emily says her accent for Mary Poppins Returns is a ‘weird amalgamation’ of Princess Margaret’s clipped vowels and actress Rosalind Russell’s character in the 1940 movie His Girl Friday.

Emily felt overshadowed by her bright older sister and developed a stutter when she was young.

It was at its worst when she was 12, and she almost stopped speaking altogether.

She said: ‘I thought, ‘Why have I got this stupid voice problem? Everyone else can talk, what’s my problem?’ ‘ 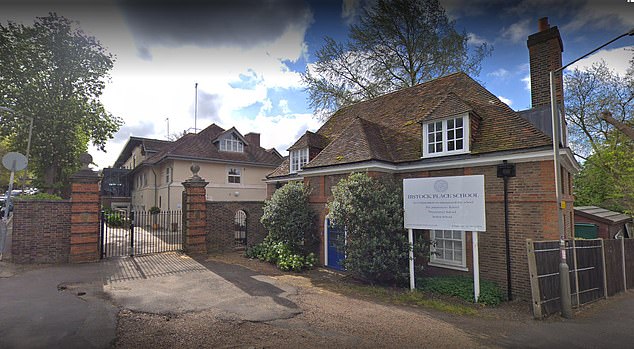 She overcame it in her teens only after trying acting as a therapy and says: ‘It still flares if I’m really tired. When I was pregnant it was really prominent again.’

A debut with Judi

She was helped on her way to stardom by Hurtwood House, a sixth-form school in Surrey which Tatler called ‘quite literally, an all-singing, all-dancing boarding school’.

The magazine added: ‘The quality of its creative arts is the school’s heartbeat.’

It was there that she gave up on her dream of working as a translator at the United Nations and ‘got into’ drama.

The head of the drama department staged a show and Emily was spotted by an agent who fixed an audition with the theatre director Sir Peter Hall.

He was so impressed with her that he immediately added her to the cast of his West End play The Royal Family as Judi Dench’s granddaughter.

Dame Judi Dench took Emily under her wing during the run of The Royal Family.

Emily said: ‘I was a kid and could have meant nothing to her, but every day after work she invited me to her dressing room. I was drinking champagne and pretending I knew what people were talking about.’

Dame Judi said: ‘It wasn’t a great play, but we had the most fun doing it. I think she was quite young, frightened and insecure. 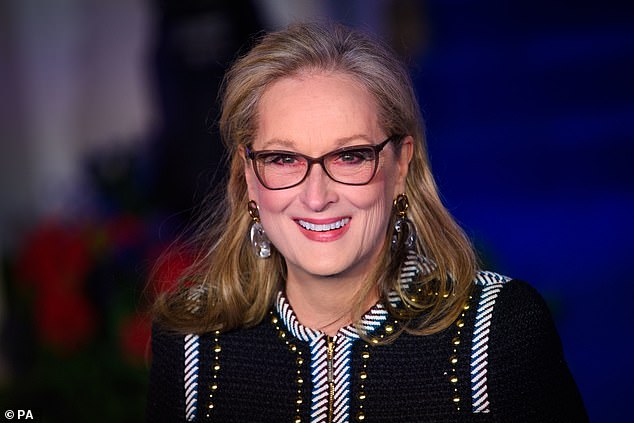 ‘She has a great sense of humour — which is more important than anything — a huge talent, and was ravishingly pretty.

‘It doesn’t surprise me at all where she is. I am thrilled that she is a big star.’

Her other great mentor is multiple Oscar-winner Meryl Streep.

They were cast in The Devil Wears Prada (Emily played the highly-strung assistant to Meryl’s monstrous magazine boss) and again in Into The Woods (Emily was a peasant baker, Meryl the witch who cursed her).

Now they are together again with Emily as Mary Poppins and Meryl as her cousin Topsy. This time, though, Emily is the lead.

Meryl Streep says of her: ‘Because she’s so smart, her wit informs everything she does. You know, they wrote Mary Poppins Returns for her.

‘The songs were written for her, it’s absolutely in her wheelhouse, and it’s so specific that I don’t know who else could have done it the way she does it.’

‘She’s just crackerjack smart and beautiful and she has the thing that you can’t teach in drama school, and that’s charm. She has it. She’s just charm.’

Emily met Canadian crooner Michael Bublé at an awards ceremony in Australia in 2005. They dated for three years.

In 2015 she was asked about rumour of his infidelity and told radio host Howard Stern: ‘I don’t know. It’s complicated. I never want to talk about it.’

Bublé responded: ‘It didn’t end because of cheating. It ended because we weren’t right for each other, and we are now exactly where we’re supposed to be.

‘Emily is a beautiful and loving person, and I’m grateful for the time I had with her. Without it, I wouldn’t have had a chance to fall in love with myself enough to be with a woman like my wife.’

The heartbreak didn’t last long. She met American actor John Krasinski later in 2008, and married him in 2010. They live in New York and have two daughters Hazel, four, and Violet, two. Krasinski is best known for playing the Martin Freeman role in the U.S. version of The Office.

She said: ‘John’s a wonderful man and we are just so happy to have found each other. 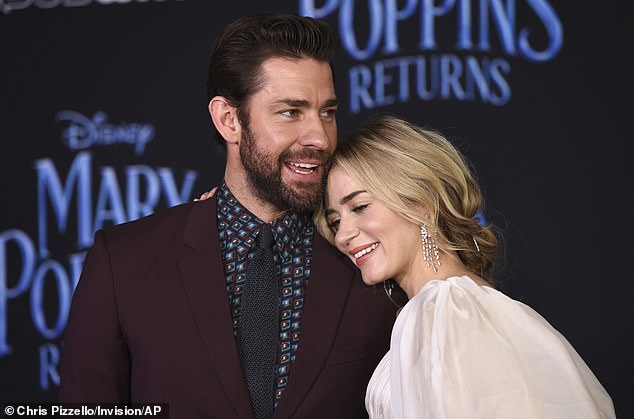 Blunt met American actor John Krasinski later in 2008, and married him in 2010. They live in New York and have two daughters Hazel, four, and Violet, two

‘It’s also a great comfort to be with someone who is good-natured and very pleasant to be around. He won’t let me stay in a dark mood very long.’

She recently made her first film with him — he directed and co-wrote the supernatural thriller A Quiet Place in which she stars. He says: ‘I love acting, but she’s on another plane.’

Krasinski stayed in New York and took the kids to school while she moved back to the UK to film Mary Poppins Returns last year.

She holds dual U.S. and UK citizenship. In an interview in 2015 she said the move was ‘mainly for tax reasons’, but that she had struggled with swearing the oath of allegiance because she ‘didn’t want to renounce my Queen’.

She added: ‘I felt quite sad, actually. Having to be sworn into a country that wasn’t mine. I know at the core of it I haven’t given up anything, but it was sort of bittersweet . . . it was odd.’

Director Rob Marshall said she was the only choice to play Mary Poppins. 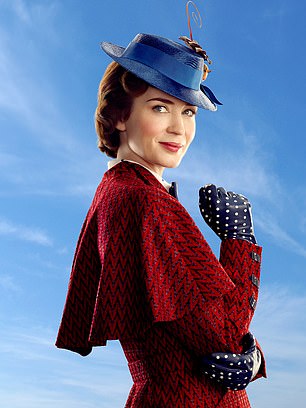 He said: ‘She reminded me immediately of a young Maggie Smith — the humour, the vulnerability.

‘I see her having an incredibly long career.

She worried about taking on the role, because the original film is so loved, and Julie Andrews was ‘an iconic person playing an iconic character’.

She reasoned: ‘No one can out-Julie Julie Andrews, so I had to do something that felt organic and representative of what I had taken from the books.’

Her interpretation is ‘a bit more eccentric. She is incredibly rude, vain and batty. She really made me laugh’.

On the Mary Poppins publicity tour, she has tended to favour spectacular but covered-up looks. Off the red carpet, she declines to show too much flesh. She said: ‘I’m not so keen on doing nudity because I’m not 22 any more.’