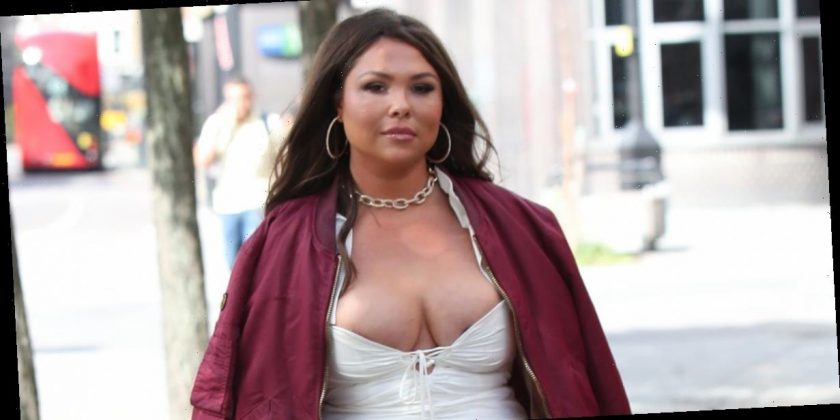 Fran Parman has made an eye-popping return to The Only Way Is Essex, after leaving the show following her shock split from Diags.

The 29 year old reality star left the show three years ago, following her split from James ‘Diags’ Bennewith in 2017.

Fran has now made her return to the show, sporting a different look as she took part in filming for the new series in Essex, which will see a number of old cast mates return to the show to celebrate 10 years of TOWIE.

Reality star Fran wore a ruched, white dress with a plunging neckline and had a burgundy puffer jacket resting on her shoulders as she walked down the street.

She accessorised the look with a pair of white high-heeled slip-on shoes with two straps going over her feet.

Fran, who previously denied plans to win back her ex Diags, also wore a pair of gold-look hoop earrings, a chain necklace and a blingy, gold-look bracelet.

Diag’s ex styled her long, brunette locks in a wavy, down hairstyle, which tumbled down her back as she strutted along a street in Essex.

She kept her makeup minimal wish a glossy lip and subtle, smokey-eye look.

Fran originally appeared on TOWIE in 2014, when she joined the show as Diags’ housemate.

The brunette initially dated Tom Pearce but, when things didn’t work out between her and Tom, she sparked a romance with Diags, now 29.

Diags and Fran dated for three years before splitting in 2017, which then lead to Fran’s swift departure from the show.

The only mention of the split on TOWIE was when Diags revealed he was a “single man”, leaving viewers questioning what happened.

Shortly after their breakup, Fran opened up to OK! online about why their relationship broke down.

Fran said at the time: “We’d booked Ibiza and we’d just moved into a new flat and he was like: ‘look, we can’t fully enjoy ourselves, we’re gonna have to go next year,’ and I said: ‘Fine, I totally understand that’ and then he just come in like: ‘Right, I’m going to Ibiza with the boys this weekend’.”

She then explained how she found it “unfair” that he went away while she stayed home alone, but wasn’t fazed by him going on a lads holiday.

Fran continued: “I said: ‘It’s not about you going out with your mates. You don’t take me out. I’m just sitting indoors all the time and it’s not fair.’ But he just couldn’t see that.

“So he went to Ibiza and I didn’t hear from him at all. I got drunk one night, and wrote something on Twitter and then I got a text saying I was embarrassing, and then he came home and acted like nothing was wrong.

“So I was like, ‘I’m going to go to Marbella with Georgia’ and he didn’t like that. But I was just like, ‘you know what, I’m doing it. I’ve got to be strong and I’m gonna do this’.”

After heading to Marbella with her friends, Fran decided to give the relationship another go, but she was left shocked when Diags declared: “We’re not working” once she returned home.