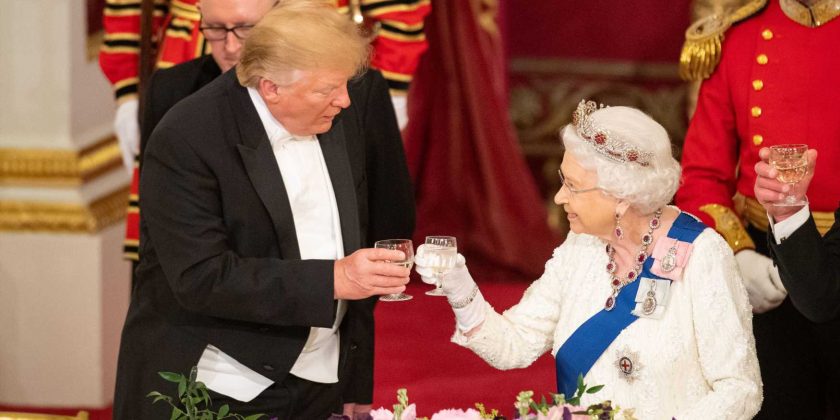 President Trump kicked off his three-day state visit to the U.K. today with a number of engagements with members of the royal family. Not everyone was happy about his trip; there was a protest outside of Buckingham Palace (plus a few rebellious signs and billboards) despite his claim otherwise. But those who didn’t defy the POTUS with physical demonstrations did so on the Internet, trolling the the Commander-in-Chief with tweets and memes because it’s 2019 and this is what we do now.

The quips began even before the president and first lady landed in the Buckingham Palace yard.

Their first photo op with the queen spurred this genius Photoshop moment with a very fitting Viktor & Rolf slogan gown.

There were also some jokes about the the president’s handshake with the monarch. From the angle of one widely-circulated photo, it appears he’s giving her a fist bump (although that unfortunately did not happen).

People took notice of Jared Kushner and Ivanka Trump, who joined in on the trip, as they eerily looked out from the Buckingham Palace windows while the royals greeted the first couple on the grounds below.

Twitter users were also confused with Ivanka’s choice of fascinator at Westminster Abbey.

The real kicker came when the queen’s official gifts to President Trump were revealed. She gave him an abridged first edition of Winston Churchill’s The Second World War, along with a set of Duofold pens, according to Town & Country. The Twittersphere pointed out the irony of giving the POTUS a present that required reading. Some even wondered if Her Majesty was trolling him on purpose.

Some joked that the Duchess of Cornwall’s wink to the press at one engagement with the Trumps this afternoon was a secret cry for help.

More trolling poured in during the state banquet at Buckingham Palace later this evening.

Those we watched a livestream of the dinner noted that some royals looked uninterested during Trump’s speech to the queen and her honorable guests.