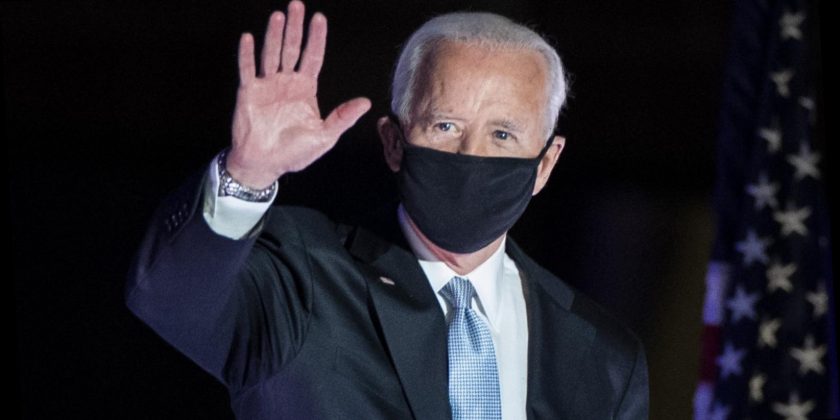 President-elect Joe Biden celebrated his 2020 election win with a moving victory speech live from the Chase Center in his home state of Wilmington, Del, on Nov. 7, 2020.

“Folks, the people of this nation have spoken. They’ve delivered us a clear victory, a convincing victory, a victory for we, the people,” he began his remarks to the nation (via The Washington Post). Calling the next era “a time to heal in America” he promised to be “a president who seeks not to divide but unify, who doesn’t see red states and blue states, only sees the United States.”

Biden thanked his wife, Jill Biden, who he said “deserve[s] a special thanks from the entire nation,” and he spoke directly to “Democrats, Republicans, independents, progressives, moderates, conservatives, young, old, urban, suburban, rural, gay, straight, transgender, White, Latino, Asian, Native American.” He also thanked “the African American community [who] stood up again for me! They’ve always had my back, and I’ll have yours,” he said (via NBC Philadelphia).

Biden said, “We’ve won with the most votes ever cast on a presidential ticket in the history of the nation,” with a total of “74 million” votes, per CNN. He added that he was overwhelmed by the “outpouring of joy, of hope, renewed faith in tomorrow to bring another day.”

Throughout Joe Biden’s victory speech, he repeatedly acknowledged the divided nation and spoke directly to those who didn’t vote for him and were upset that President Donald Trump would not be returning for a second term. “I understand the disappointment tonight. I’ve lost a couple of times myself,” Biden said (via NBC Philadelphia). He ran for president in 1998 and 2008 as well. “Now let’s give each other a chance. It’s time to put away the harsh rhetoric, lower the temperature, see each other again. Listen to each other again. And to make progress, we have to stop treating our opponents as our enemies. They are not our enemies. They’re Americans.”

Vowing to unite the American people, Biden said, “Let this grim era of demonization in America begin to end here and now!” That quote has become one of the most memorable lines from his speech.