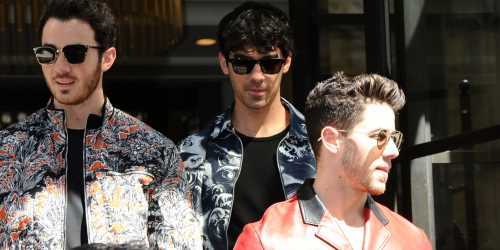 The Jonas Brothers wave to fans while leaving the Corrinthia Hotel in London, England on Thursday morning (May 30).

A sneak peek of the guys’ new interview with CBS Sunday Morning was just released, where Nick, Joe and Kevin go into more detail about their breakup in 2013.

“I checked out in my mind that – that was it. There’s going to be no more brothers ever,” Joe shared in the snippet of their appearance, which airs THIS Sunday, June 2nd @ 9AM ET/PT on CBS.

Nick admitted that there were a lot of things going on at the time they split up: “To call it creative differences is almost too simple, and I think a lot of people lost the appetite for what we were putting into the world. So, you know, we were putting up shows that weren’t selling. We were making music that I don’t think we were all super proud of, and it wasn’t connected.”

He adds, “I had a very tough conversation with them where I laid it out for them. I said, ‘You know, I feel like the Jonas Brothers should be no more, and we should go on individual journeys.’ And it didn’t go so well.”

“I think we – we definitely were supposed to go through all of what we went through to get to this point, definitely,” Joe shared. “I think it was, it was kind of, I guess you could say destiny, whatever it may be, but yeah, we got a do-over, and I think this time around we’re going to do it right.”

Watch the sneak peek inside the cut!