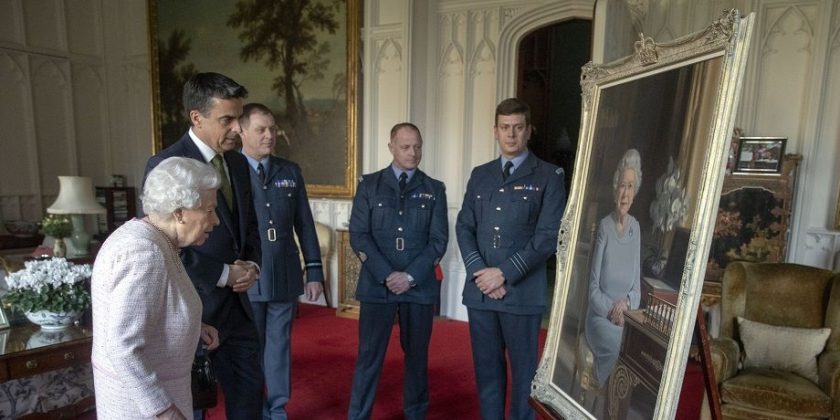 A regal new portrait of Queen Elizabeth will be displayed in the Royal Dining Room at her Scottish residence, the Palace of Holyroodhouse. This is the Queen’s country residence.

In the portrait, Elizabeth is wearing a flowing green velvet robe, according to Good Housekeeping. But she’s also wearing something else — a symbol that contains its own hidden message, and only royal experts spotted it.

On her left shoulder, the Queen is wearing an emblem in her portrait. This is emblem for the Order of the Thistle. And this is more than a fabulous brooch, though it is definitely that. The Order of the Thistle is a diamond-encrusted star-shaped brooch with a gold medallion at its center.

You have to look closely at this pendant to see the message it contains: “Nemo me Impune Lacessit.” This Latin phrase means “No one harms me with impunity.”

Legend says the Order actually dates to 809, when King Achaius made an alliance with Emperor Charlemagne of France. It was James II who established a set of rules for the Order in 1687, and used it to reward loyal Scottish subjects.

The Queen determines who receives the Order.

Elizabeth II actually had two portraits painted. A second portrait was unveiled on November 30 showing the Queen in a blue dress, a string of pearls and a brooch bearing the Astral Crown and Lee Enfield rifles. This was given to her by the RAF Regiment.

The Scotland portrait was painted by Nicky Philipps, a favorite of the royal family, according to Marie Claire. Philipps painted the first double portrait of Princes William and Henry in 2010.

The RAF painting was done by Stuart Brown. This portrait will be displayed at the RAF base in Suffolk, according to USA Today.

The two new portraits are part of an ever-growing collection of portraits of Elizabeth II. As England’s longest-reigning monarch in history and a wildly popular one too, Elizabeth is still a highly in-demand portrait subject.