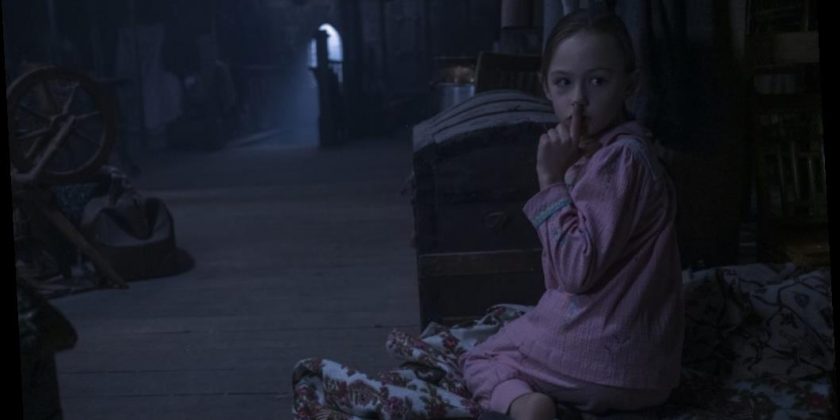 With spooky season in full swing, many people are enjoying The Haunting of Bly Manor. The Netflix anthology series brought back several actors from The Haunting of Hill House, but some of the show’s younger stars are fresh faces. Still, these young actors, including Amelie Bea Smith, seem familiar. Find out why Smith, who plays Flora Wingrave, might sound familiar to you.

Showrunner and horror guru Mike Flanagan brought some of the cast from The Haunting of Hill House back for the second installment in the anthology series.

Pedretti plays the Wingrave’s new governess, Dani Clayton. Her role is a far cry from the tormented Nelly Crain seen in season 1 of The Haunting. Henry Thomas, Oliver Jackson-Cohen, and Carla Gugino also star in The Haunting of Bly Manor — again, with drastically different roles.

There’s another actor from season 1 in Bly Manor, but their identity is super secret! Smith, along with her co-stars Benjamin Evan Ainsworth, Rahul Kohli, T’Nia Miller, and Tahirah Sharif are newcomers to The Haunting franchise.

Smith plays the orphaned Flora Wingrave. She and her brother Miles (Ainsworth) lost their parents at a young age and were left in the care of their Uncle Henry (Thomas).

Early on in the series, it is clear Flora isn’t a typical little girl. She is often distracted, her mind drifting off into memories. What’s more, she plays with handmade dolls that resemble Bly’s inhabitants — past and present.

Before Smith joined The Haunting franchise, she played a much less menacing role in a popular children’s series.

Amelie Bea Smith is the voice of Peppa Pig

Before she became Flora Wingrave, Smith signed on to serve as the latest voice of Peppa Pig.

The beloved children’s character was originally voiced by Harley Bird, who left the role at 13-years-old. Bird took over the role in 2007 during the third season, voicing Peppa for 185 episodes. In 2011, she won a BAFTA for the Children’s Performer category.

“Becoming the voice of Peppa Pig at the age of five was the start of an incredible journey, and I’ll never forget my time on the show,” Bird said (via Deadline). “The people that work on Peppa Pig have become like a family to me and they’ve given me some unforgettable memories. I wish Amelie the best of luck in the role and am looking forward to starting the next chapter in my life.”

With age comes new opportunities for Bird. Now, she has moved on from the show, allowing for up-and-coming actor Smith to become the famed cartoon pig.

In February 2020, Smith became the voice of Peppa Pig. If you’ve seen the latest episodes of Peppa Pig, you have most likely heard Smith. If you’re not a Peppa Pig fan, you still may have seen Smith before. She has appeared in the British soap opera EastEnders as Daisy.

Now, you can see Smith in The Haunting of Bly Manor.