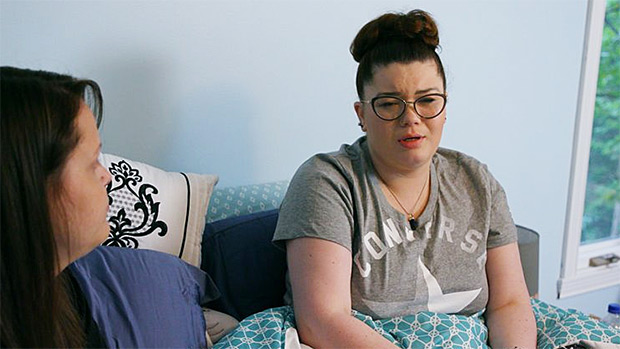 So sad. Amber Portwood’s postpartum depression has pushed her to the point of contemplating suicide, which she reveals in the Dec. 17 episode of ‘Teen Mom OG’ — here’s why.

After Amber Portwood, 28, welcomed her son James in May, her second postpartum period has given her personal demons she hasn’t battled before. In a sneak peek clip for the Dec. 17 episode of Teen Mom OG, Amber’s heartbreaking confession to cousin Krystal reveals how badly she wants to get past this rut. “I just can’t accept the fact that I have postpartum in anyway. I just didn’t know what it felt like because I have never experienced that before,” the MTV star told her relative. After the cousin asked if her boyfriend and baby daddy, Andrew Glennon, is aware, Amber admitted that their “relationship has definitely been different.”

“We’re not as lovey, we’re not as on each other as we used to be,” Amber continued, explaining that they’re “tired” since their son’s birth — but that’s not the sole reason. “We’re just stressed out because I’m always unhappy,” Amber said, and what she revealed next made her cousin cry: “There was a night that I was waiting for him and James to go to bed so I could kill myself. And for some odd reason he could feel it and he’s like, ‘I’m not going to bed.’” But aside from her current postpartum period, the MTV star still harbors guilt from her past mistakes while raising her first child, Leah.

“People saying to me like ‘Why couldn’t you do this for Leah,’ I was young and stupid,” Amber said of her 10-year-old daughter with ex-fiancé Gary Shirley. You can watch the video below to hear the rest of Amber’s confession. In the earlier years of Leah’s life, Amber was going through a rough time — she was charged with domestic violence against her ex, Gary, in Nov. 2010, and then arrested again for drug possession in Dec. 2011. She served 17 months in federal prison for the drug charges from March 2012 to Nov. 2013.