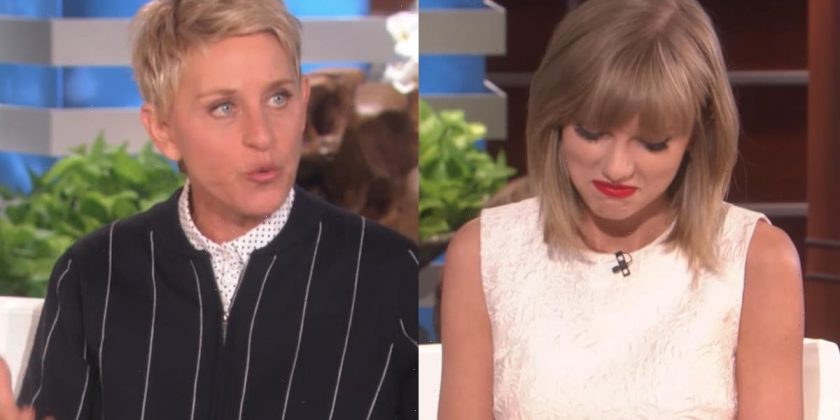 Do not mess with Taylor Swift, y’all! Her fans hold a grudge like no one’s business when their girl has been wronged. Of course, you can’t really blame anyone for getting upset watching this particular clip…

Ever since the inside takes on Ellen DeGeneres went public — the widely whispered Hollywood talk that she was the opposite of her nice, positive TV persona, allegedly treating her employees and everyone else like trash — folks have been looking back at her old interviews with a different eye.

The first was that classic Dakota Johnson interview in which the 50 Shades Of Grey star calls out the daytime diva for lying about being invited to her party. But in the past months, folks have found tons of awkward moments in which celebs look sincerely uncomfortable. You can even find multiple supercuts on YouTube.

Now a particular 2013 interview has resurfaced in which Ellen just mercilessly badgers Taylor about her love life. It would be one thing if it felt like the Blank Slate singer was in on the bit, but she actually just keeps expressing her discomfort and asking the host to stop. Which of course she does not.

The interview begins with Ellen insisting the pop star was dating Zac Efron despite multiple denials. After the comedian calls the Baywatch star her “boyfriend” and asking incessantly about him, Taylor reiterates her denial, saying:

“I haven’t talked to him in a while… ’cause we didn’t date.”

To which Ellen responds:

But that isn’t the end of the dating talk. Tay next has to play a half-ass sort of game in which she looks at photos she’s taken with celebs and has to ring a bell when one comes up showing a guy she’s been with. You know, the one you play with all your friends…

Taylor over and over tells Ellen, “I don’t want to,” but it just happens anyway. Eventually it reaches a fever pitch in which Taylor says:

“Do you know how bad this makes me feel? Stop it, stop it, STOP.”

The audience just laughs, but remember — this is 2013. They’re assuming Ellen is just so sweet, and Taylor must be in on the joke. In retrospect, it just looks like someone being tortured on stage for over four minutes.

See the whole exchange (below):

The fan who apparently first dug up the old interview about a week back was TikTok user Nya Johnson, who suggested Taylor “deserves an apology” and posed the question:

“Do u think Ellen thrives off of making guests uncomfortable?”

The TikTok has been viewed over 4.8 million views since August 30. Wow.

Fans flooded the comments section, all taking Taylor’s side so far as we could see. Here are some of the most popular comments:

“This was brutal to watch.”

“she listened to her say ‘this is like the one shred of dignity that i have’ and then just??? keep going?? and taylor tries to joke along anyway :(”

“You can tell they didn’t have that in preinterview. Poor taylor :/”

“Why do they always do this to women. Like our on accomplishments are whom we’ve dated. It’s so sad.”

What do YOU think of the interview in retrospect? Are there any other Ellen moments you think need revisiting??