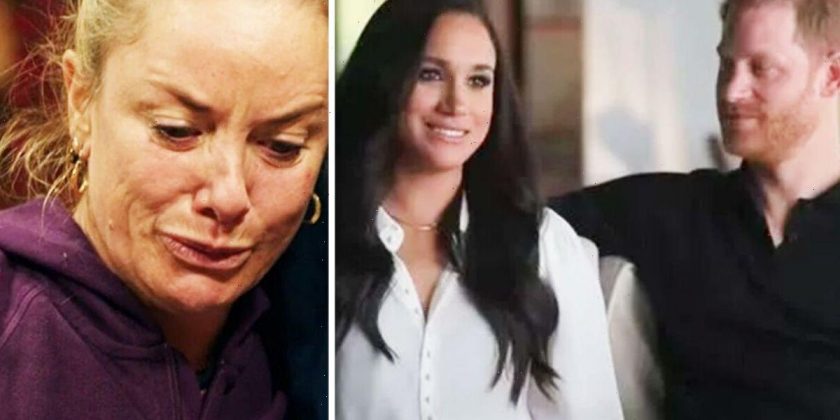 The first instalment of Prince Harry and Meghan Markle’s highly anticipated Netflix docuseries was released today. Former EastEnders actress Tamzin Outhwaite was admittedly “in tears” as she addressed the Duke and Duchess of Sussex.

The 52-year-old was moved by the first episodes of the couple’s explosive Netflix documentary as the Royal Family braces itself for further revelations.

Harry & Meghan – a six-part docuseries – dropped on the streaming giant at 8am, with the couple delving into a string of details about Harry’s mother Princess Diana, how the couple met, their first dates, “unconscious bias” in the Royal Family and why the Sussexes had to quit in 2020.

Taking to Twitter today, Tamzin shared her thoughts about the couple’s desire to speak out about their lives.

She told her 267,000 followers: “Well I am watching that new @netflix doc #HarryandMeghanNetflix and I am actually in tears. I know it’s their side of the story but I believe them and adore them.”

In a follow-up tweet, Tamzin wrote: “I think Diana would be proud of them #HarryandMeghanNetflix.”

Chelcee Grimes replied: “No one can imagine living that life. Everyone moaning saying the clips of paps following them aren’t real? Like that doesn’t happen to them wtf. Some people just want to pick them apart. But they are in love & it’s their life so just let them be is what I say TamTam! Xxx.”(sic)

Tamzin replied: “Yes Chelcee! They are gorgeous together and his life after his mum died must have been horrific. Don’t actually blame the monarchy, but jeez that life must be tough.”

In never before seen footage, viewers got a rare insight into Harry and Meghan’s first date at the start of their romance as well as their first getaway to Botswana.

In the first episode, Harry compared Meghan to his late mother, Princess Diana.

Episode one features footage of a young William and Harry playing at a piano accompanied by their parents and interview footage of Diana talking about her two sons.

William appears to tell Harry not to stand on his toe, and Diana says: “William. He’s a typical three-year-old. Very enthusiastic. Whereas perhaps Harry is more quieter and just watches.

The Duke of Sussex also shared he does not have early memories of his late mother, Diana, believing he has internally “blocked them out”.

Diana died in a car crash when Harry was just 12, but the duke, in his new Netflix documentary, said he still remembers her “cheeky laugh”.

Harry explained: “I don’t have many early memories of my mum. It was almost like internally I sort of blocked them out.

“But I always remember her laugh, her cheeky laugh, her always saying to me ‘You can get in trouble – just don’t get caught’.

“I’ll always be that cheeky person inside.”

Prince Harry first met Meghan back in 2016 and shared he first saw the former Suits actress on Instagram.

The couple were then introduced by a mutual friend and two years later they tied the knot.