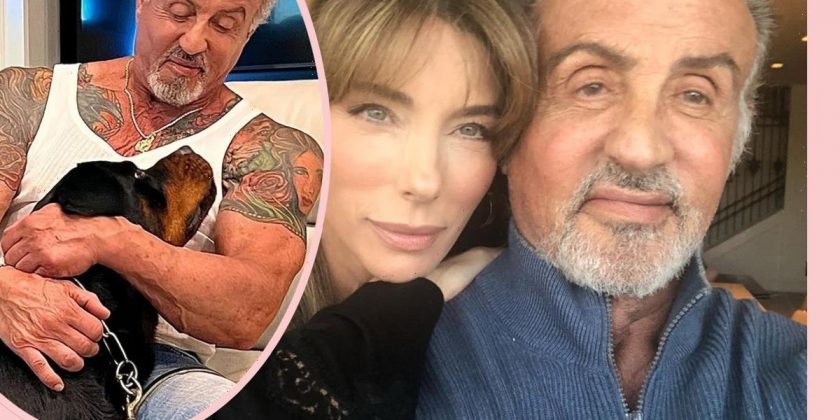 We’ve heard some awful reasons for breakups, but this is definitely one of the most barking mad ones!

In case you haven’t heard the sad news, Sylvester Stallone and his wife Jennifer Flavin are getting a divorce after 25 years of marriage. In her filing late last week, she cites money problems, implying he’s blowing their “marital assets.” But according to a new TMZ report it’s one purchase in particular that caused the blowout fight that saw Rocky himself getting KOed. The purchase of a pup.

A source close to the couple told the outlet Sly wanted to buy a new dog, a Rottweiler named Dwight (that’s him in the pic above!). But Jennifer said no — and put her foot down! However, neither would back down, and the fight just kept escalating, bringing up lots of disagreements the couple had. None of the others were bad enough to end a marriage on their own, according to the source, but all together…

Sly went through with the purchase of Dwight, apparently pushing Jennifer to go through with filing for divorce! Oof!

According to TMZ‘s sources it was while Stallone was filming his new show Tulsa King in Oklahoma — and the news completely took him by surprise! Insiders say he thought they’d work it out. Wow.

This explains his caption calling Dwight “a true friend!”

So we were already skeptical with the Escape Plan star’s official explanation of covering up his tattoo of his wife’s face — that it was unintentional and fixing a screwup. But now the fact we know it’s a portrait of a dog, reportedly his late pup Butkus, there’s no way we can believe it isn’t a message for his ex.

That being said, Sly did issue a statement to the outlet denying his beloved dog being the reasoning behind their divorce:

“We did not end the relationship on such a trivial argument.We just went in different directions. I have the highest respect for Jennifer. I will always love her. She’s an amazing woman. She’s the nicest human being I’ve ever met.”

Aw, well, as sweet as that is, is it how she feels too?

As unbelievable as it sounds, TMZ‘s sources seem sure it was the dog decision that split up the marriage! The couple were by all accounts getting along OK before that, and Sly denies whatever money issues Jennifer referred to in her divorce filing!

It seems like a small argument in the grand scheme — but we understand if it’s just the principle, too. Relationships are about compromise, and it sounds like neither husband nor wife was willing to do that. Sad, but we guess it happens…

At least he’ll have a dog house to stay in, right?

What do YOU think of this bizarre turn of events??