Suri Cruise and Katie Holmes are taking the New York City heat wave in their stride, stepping out in casual ensembles for a day of mother-daughter bonding.

Suri Cruise, 15, has stepped out for a stroll in New York City alongside her mom Katie Holmes. The 42-year-old Dawson’s Creek alum is regularly spotted running errands in Manhattan with her mini-me in tow, and the duo practically looked like sisters when they were seen walking on August 12. Katie cut a chic figure in a plain white tee and crisp white trousers, which were rolled up at the cuffs. 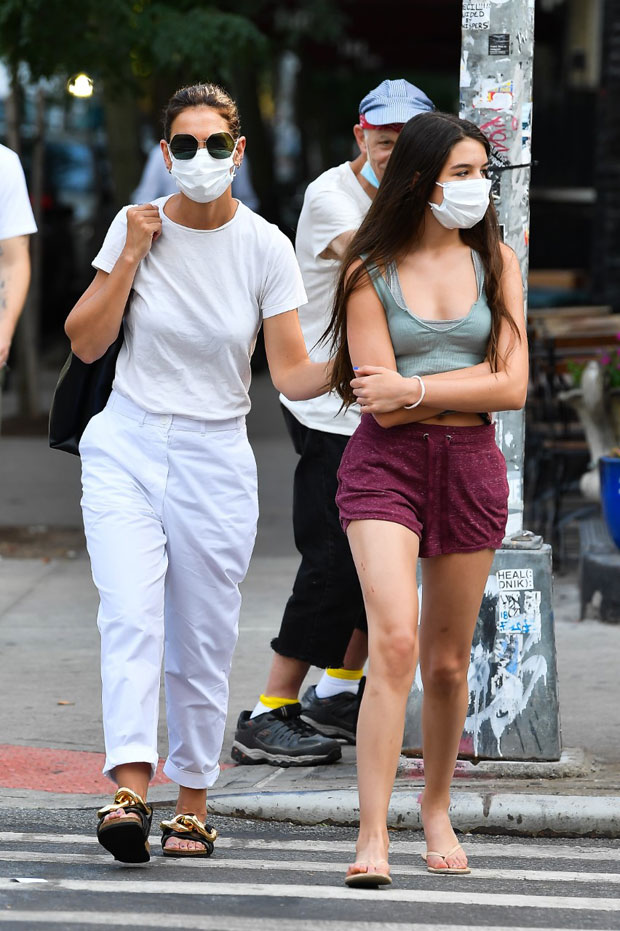 She accessorized with a black leather tote bag, and a pair of black slides which featured large gold buckle detailing. Of course, Katie stayed protected in a white face mask and dark hexagonal sunglasses, as she slicked her raven tresses back into a bun. Meanwhile, her teenage daughter, whom she shares with Tom Cruise, proved just how quickly she’s growing up as she looked so tall next to her mom.

She cut a casual figure in a pair of maroon shorts and a pale blue tank top layered over grey sports bra. She accessorized with flip-flops, and allowed her long brown hair to fall down her back, over her shoulders. Like her mother, Suri also wore a white protective face covering.

As fans would know, it came a couple of weeks after she stepped out alongside her mom in very similar ensembles. The mother-daughter duo were out and about in New York City on July 27 when Suri opted for a pair of dark-wash low-rise straight-leg jeans. She paired the on-trend pants with a pastel yellow tee and sneakers, as her mom Katie donned a pair of baggy low-rise pants and a white ribbed tank top.

While the actress has always remained extremely private about her relationship with her daughter, she offered fans some rare insights into Suri’s personality during her April cover story with InStyle in 2020. “My biggest goal has always been to nurture her into her individuality, to make sure she is 100 percent herself and strong, confident and able. And to know it,” Katie said. “She came out very strong — she’s always been a strong personality.”