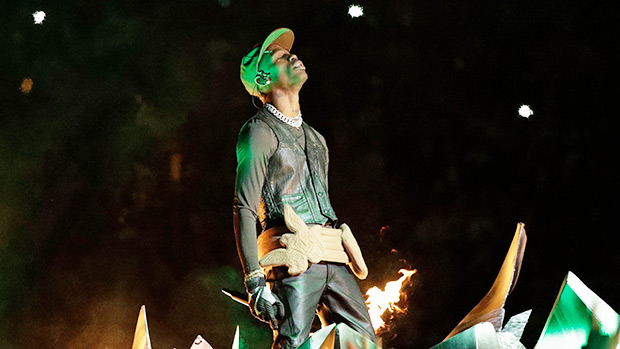 Stormi Webster watched her dad Travis Scott perform at the Super Bowl and the video is ‘priceless!’

This is so cute! Stormi Webster is her dad’s biggest fan! The one-year-old cutie was recorded watching her dad, Travis Scott, perform in the Super Bowl halftime show, it’s seriously adorable! Rocking her Astroworld merch, Stormi wore a rainbow hoodie and danced in front of the television while her dad rapped with Maroon 5 on the world’s biggest stage. The whole thing was documented and posted to mama Kylie Jenner‘s Instagram with the caption “PRICELESS!”

Stormi was watching the halftime performance in a private suite inside the Mercedes-Benz Stadium. Kylie was also joined in Atlanta by her friend Jordyn Woods, who shared a pic of herself and friend, Jordan Fame, enjoying the game from a box. Kylie has yet to share any details of Travis’s performance to her social media, but she did show off her stunning fur jacket and natural beauty look while on her way to the big game!

Just a day before Travis’s big performance, Kylie showed her support for her man, who she lovingly refers to as “hubby,” by posting a picture of the two with the caption “baby #2?” While we’re definitely anxiously awaiting baby number 2 from Kylie and Trav, we were also hoping that the rapper was going to pop the question to his baby mama during his performance. However, the “Goosebumps” rapper only performed one song, “Sicko Mode,” and excited fans with a brief appearance from SpongeBob and his iconic rendition of “Sweet Victory,” which he performed at the “Bubble Bowl.” While it wasn’t the proposal we were hoping for, fans were pleased with the inclusion of Spongebob, since fans launched a Change.org petition in November 2018 after the death of creator Stephen Hillenburg, calling for artists to perform “Sweet Victory” in his honor.